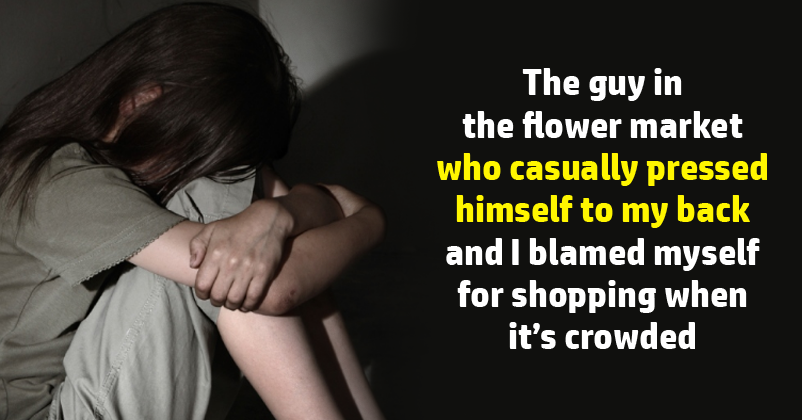 When the woman is molested, she becomes the target of all blames. Society starts seeing her with a different angle and points out towards her without a reason. After seeing this societal pressure, the only thing that a woman thinks is “Why the hell did I wear this dress?” or “Why the hell was I out so late?”. The girl starts taking the blame on herself and even though she’s right, she starts feeling responsible for it.

Is it right to think this way? After being molested, the woman thinks that all other people on the road were decent and only she was the one who was wrong. In a recent blog, a woman named Poornima has highlighted this bitter reality about women facing this abuse. Be it at the temple, or be it at the tailor, women are always targeted for “Wrong touches” but no one knows the actual culprit; for everyone, it is the woman who has given a chance to molest.

This post by Poornima is very hard hitting and is specially for women who feel they are wrong. After reading it, the mindset will surely change.

I was at the tailor yesterday. He had to take measurements and yet again, his hands were where it shouldn’t be. They always were but with my mother not around, it was more obvious now. I walked out wondering why he felt like he could. Maybe I should’ve panicked. I should’ve screamed and said, “What are you doing?” But I was silent. I had told myself it’s part of life as a woman. Maybe I look like someone he could take advantage of. Maybe it’s not his fault that he feels entitled. Maybe it’s… me. Is it me?

I told my mother later that day, “If this man was bad at his job, he’d be in jail for molestation already.” She shrugged and told me it’s who he is. She asked me why I couldn’t find another tailor. That sounded like a normal question to which I responded that not everyone can stitch well for fat people with slender shoulders. This one does. So I have no choice. Maybe if my body was different, I could avoid this. Or maybe it’s because I’m fat and my boobs are too, he feels the need to. Is it me?

But this wasn’t the only man. If I had to list down similar experiences, I could go on forever. Like the guy in the flower market who casually pressed himself to my back and I blamed myself for shopping when it’s crowded. The old man at a temple who casually touched my butt and I cursed myself for not knowing it’s a mistake and thinking bad of an aged person.

The married man on my right running his hands along my legs when his wife is sitting to my left and I knew I shouldn’t have worn those shorts on a Saturday night. Oh! How could I forget the stinking man who pressed my boob flat while he walked past me making me shiver with disgust for days and I shouldn’t have worn that damned kurti when I knew it was a little tight. If so many felt so comfortable over a decade, it couldn’t have always been them. It is me, isn’t it?

But then I remembered the man who asked me to kiss him when he thought he’d gotten me alone.. at 12 years old! I wore a middle school uniform and ran for my life. That wasn’t me. I didn’t know men could behave like that. I didn’t have big boobs, I didn’t wear tight clothes and it wasn’t an accident.

I suddenly realised I was wrong. When I answered my mother’s question, I was wrong. I was focusing on the wrong part of what she’d said. When she’d asked me why I still went to this man when I knew he was like that, I shouldn’t have given her a reason. I should have asked her why he was forgiven.

Why have we accepted the fact that he is who he is and come to terms with it? Why are our questions always turned towards ourselves and not the other person?

Why did I what?

Wear a dress I’d loved and bought with money I worked hard for? Go out of my house to unwind after a day of chaos with friends who just wanted a laugh and a fun night out? Smile at a stranger who was older than my father out of courtesy because I was taught to be kind and never harsh? Scream at a man that was invading my private space in a very disturbing manner knowing he could kill me and my Government will tell you its my fault?

Why did you raise a son who thought he could have it all? Why did you tell him he can abuse me and walk away because it’s his birthright to be an asshole? Why did you shame the girl who talked about it instead of applauding her for being brave enough to relive that experience over and over again with every word she spoke? Why did you bring a nation’s culture and values into behaviour that should be punishable?

Because what if they read? All those men who have grazed and touched like I belong to them just because I’m walking past. They’ve made me used and worthless. What if the man I will someday marry read this? Because YOU have taught and preached to him that a woman is only good if she is pure and untouched. But then you went and told him he could. Now what about me?

You don’t have to answer to me. I’m nobody to you. But your daughter, your wife, your best friend, your future family will need to know why you, in your need to make your son feel important and manly, have tarnished her safety and way of life. Will you tell her it’s her fault? Will you tell her she should’ve known better?

Will you still say “Yes?” Or hang your head in shame?

Because we both know, it’s not her.

We are in fact setting a bad example for our future generations by blaming women for such disgusting incidents. Would you like to blame your daughter/sister this way? Think twice and act accordingly.