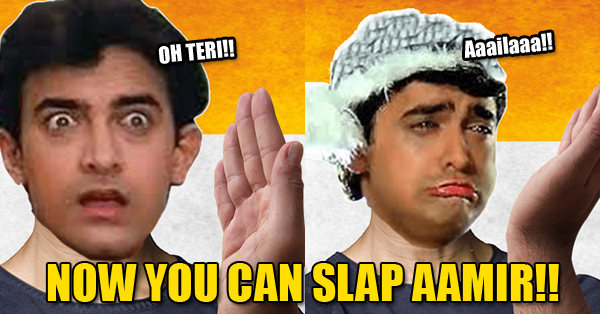 We all knew how big the outrage has happened when Bollywood’s Superstar Aamir Khan talked agianst Intolerance at Ramnath Goenka Excellence in Journalism Awards, that he was alarmed by many instances and his wife Kiran Rao also adviced him to leave India. The outrage lasted for a whole week with many hashtags against the actor.

Later  on 26th of November, one of the Shiv Sena leader has offered a prize money of Rs. 1 Lakh to anyone who slapped the Bollywood Superstar Aamir Khan who talked about the rising Intolerance in India.

While no one dared to reach Aamir Khan regarding the same, but guess what Internet has come with a solution for this. Someone created a site & thereby giving a chance to the users to slap the Superstar – SlapAamir.com . This site was created by Miami Ad School.

The site comes up with the warning “Slapaamir.com is for humour and creative purposes only and does not represent any political views of the people involved. Please be tolerant of our humour.”

More shocking news is that Aamir Khan was slapped (virtually) more than 1,00,000 times with in a few hours after launching the site.

This was done just for fun. Don’t take it Seriously.