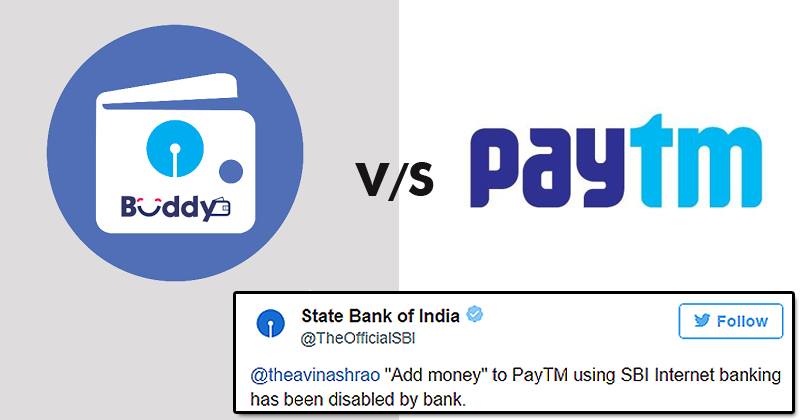 It seems that State Bank Of India has the desire of monopolizing market share subsequent to note ban and that’s why, there’s a strict NO from its side for using Paytm wallet.

Yes, that’s right! As per SBI’s official Twitter handle, individuals who are making use of Internet banking of SBI won’t be able to transfer money to Paytm & as a replacement for the same, it suggests people for using its own wallet, “State Bank Buddy mobile”. This issue came into the knowledge of public after a Twitterati made a tweet that he was unable to transfer money from his SBI account to Paytm wallet. After this, several users of SBI Buddy started posting comments and demanded for the upgradation of SBI’s Buddy Mobile rather than prohibiting the use of Paytm.

As we know that Paytm doesn’t leave a single opportunity, it promptly gave a reply, “Happiness was guaranteed at Paytm.”

Happiness is guaranteed at Paytm. If we fall short of your expectations, give us a shout. #Paytmkaro!

Users of SBI’s Buddy App have the facility of accessing the app of sellers without having to download it. For this purpose, tie-ups have been made by SBI with various merchants and a good thing about it is that even non-SBI customers can use the app.

Previously, Vijay Shekhar Sharma, founder of Paytm, uploaded a pic featuring a banner which showcased comparison between features of Paytm and SBI Buddy. What’s more, it also talked about the security aspect of Paytm highlighting its Chinese ownership.

Needless to say, State Bank Of India is a very big name in the field of banking with about 3 lakhs staff members and 14,000 branches all over the country; however, it was left behind in the digital race by small startups that very quickly captured the market by means of easy-to-use features in addition to offering great deals. It seems as if SBI is in a hurry to make up for the lost time and establish itself in the digital space by putting a ban on transfer of money to Paytm wallet.

In another development, a public notice was issued by One97 Communications, the parent company of Paytm, which stated that subsequent to mandatory permissions, the wallet business of the firm will be transferred to the Payment Bank entity which has been recently incorporated.

As reported officially, a whopping sum of Rs. 220 Crore has been invested by Vijay Shekhar and One97 Communications jointly in Paytm Payments Bank Ltd., the launch of which is postponed till early 2017.

The point of sale feature was also withdrawn by the company the next day of its launch, as some questions were raised by MasterCard and Visa regarding its security. Just recently, Paytm got stuck in a lawsuit filed by PayPal in connection with trademark infringement.

It seems that the market of digital transactions will get heated up soon and SBI Buddy blocking Paytm is just its beginning. What do you say? Share your opinion about it in the comments section below.