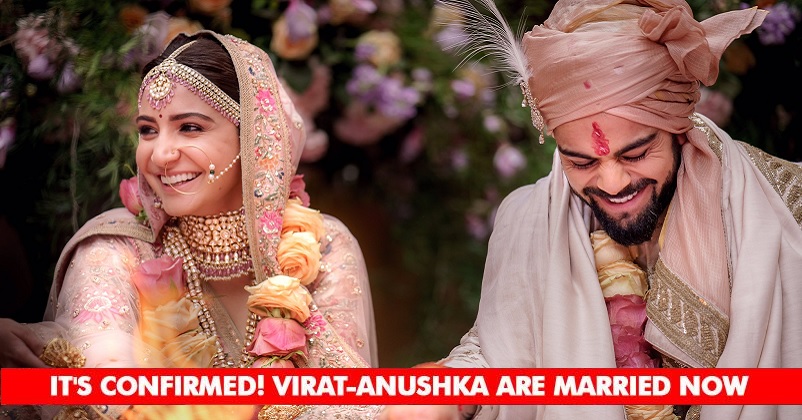 Finally, we have one more cricket-Bollywood Jodi Virat and Anushka. There were a lot of speculations surrounding the marriage of Virat Kohli and Anushka Sharma. We were curious to see them tie the knot and finally it has happened.

We are overjoyed by the news of them becoming man and wife. The duo tied the nuptial knot at Tuscany today & kept it secret.

Since few days, there was news that the couple has flown to Italy along with pandit and that the wedding venue is ground. Now that they are officially married, we can’t be happier! High security was deployed at the wedding & no media was allowed 5 kms of the venue.

However, there were certain people who said that festivities were on in the morning; some even heard the sound of drum beats. Even the guest list was kept limited.

The first selfie of the newlywed is out & has brought a big smile on our faces;

And an official confirmation from Virat Kohli..

Today we have promised each other to be bound in love for ever. We are truly blessed to share the news with you.This beautiful day will be made more special with the love and support of our family of fans & well wishers. Thank you for being such an important part of our journey. pic.twitter.com/aobTUwMNAK

And from Anushka Sharma…

Today we have promised each other to be bound in love forever. We are truly blessed to share the news with you. This beautiful day will be made more special with the love and support of our family of fans & well wishers. Thank you for being such an important part of our journey. pic.twitter.com/Scobdiqk7l

And here’s one more pic of Mr. and Mrs. Kohli…

There are few who are so lucky to tie the knot with someone they love & you are one of them. As your fandom representatives, we wish these pleasures will last forevermore. Wishing a very Happy Married Life to the couple we adore! 💑 @imVkohli @AnushkaSharma #VirushkaWEDDING pic.twitter.com/4xfHwQm7I2

Wow, they look amazing together.

The wedding took place in a lush green resort Borgo Finochhieto in Italy. It’s a 13th century hamlet and was simply the perfect location for the couple’s ceremony. This was definitely a dreamy wedding and may God bless the couple with lifetime of happiness.

Lisa Haydon Has Completely Transformed & People Don’t Like Her New Look. She Got Trolled
Video From Virushka’s Jaymala Ceremony Is Leaked. They Are Looking Cute Together