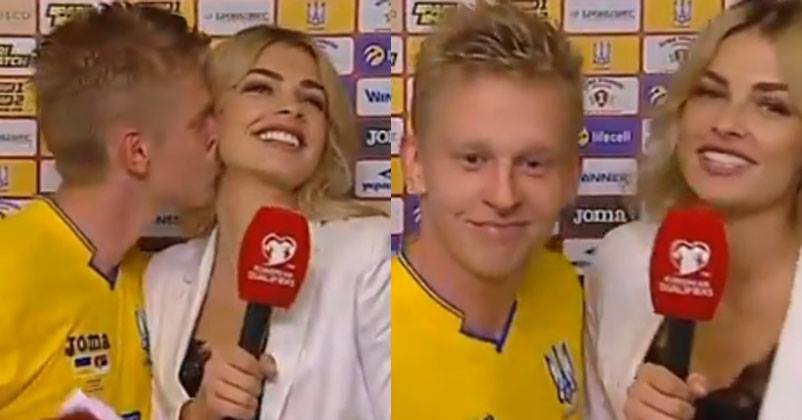 Oleksandr Zinchenko celebrated his victory to Serbia on Friday by kissing a reporter on her cheeks. There was a match between Manchester and the player had a central midfield position during Ukraine’s UEFA European Championship qualifying encounter with Serbia on Friday. His position was fairly unfair for him, but he excelled in the match.

Post the defeat, in which they won by 5 goals. Oleksandr was seen giving an interview to a reporter, before leaving he gave a peck on her cheeks. The reporter known as Vlada Sedan was kissed at the end of a live interview, he also gave a cheeky smile to the camera before walking off.

Zinchenko kisses a reporter and she loved it 😂 pic.twitter.com/l2WpbM4gBn

Several people were disgusted by this act, but little did they know that the star and the reporter are best of friends!

The incident came out because this has happened before. Kubrat Pulev being ordered to complete a sexual harassment course after he kissed a female reporter on the lips following a victory in March.
Soon people found out that they are friends and all the negativity was cleared up.

Continue Reading
You may also like...
Related Topics:Oleksandr Zinchenko

Gavaskar Is Furious At Indians Who Want To Boycott WC, Says ‘ Think Before You Talk’
Jofra Archer’s Ball Hit The Wicket And Still Went For A ‘Six’ Without Hitting The Ground

Man Got Pokemon Cards 20 Years Ago, Sold Them Now For Whopping Rs 33 Lakh