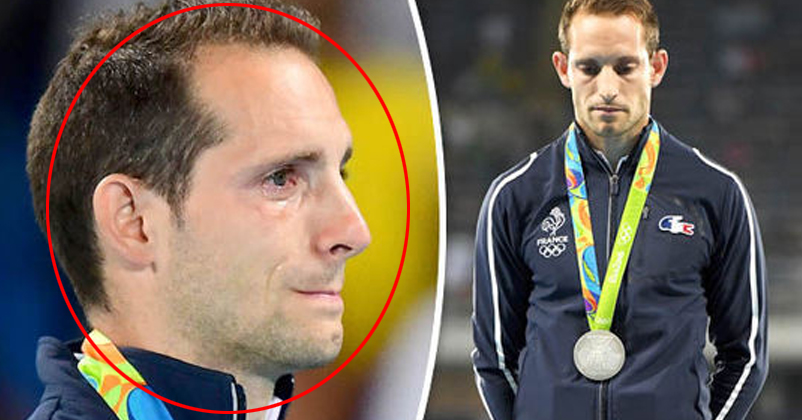 Crowd support is something that helps an athlete to build up his confidence. Crowd support plays an important role in the performance of an athlete. It gives them confidence and boost up their energy for the coming sessions. It is quite obvious for a host country crowd to support their own players. Being an Indian, my heart beats for PV Sindhu’s victory Rio Olympics 2016 has seen a lot of new interesting things. With many controversial cases to very beatiful sights. And that the beauty of world sports events. And this one is the biggest sporting event in the world so such beautiful sights are ought to be seen. But along with these beautiful moments, things do go ugly and last night was one of those moments where the French pole vault star Renaud Lavillenie shedded tears after he was ruthlessly booed by Brazilian fans while he was receiving his silver medal standing on the podium. The controversy or the sad ordeal started off on Monday when Renaud Lavillenie expressed his disappointment by hitting out at Brazilian fans for their poor conduct and derogatory behaviour during the pole vault final. He was defeated by the Brazilian pole vaulter Thiago Braz in a dramatic final which restricted him to the Silver Medal. Even while taking the final attempts in the competition he was attacked by deafening booing and catcalls as he prepared to jump.

Later on, while he was being awarded the medal the crowd again started to boo him which was completely unacceptable as an athlete and a human too. His emotions contradicted with his conscious and eventually he felt dejected and lost which made him cry while the National Anthem was being sung. Catch The Video here

After he was booed by the crowds which made him cry due the disappointment, he was consoled by international athletics chief Sebastian Coe and International Olympic Committee president Thomas Bach, an AFP photographer saw.

Later that night in the midst of heat of moment, he slashed out at the host nation fans by comparing their poor conduct to the treatment meted out to Jesse Owens in the Nazi-era 1936 Berlin Games.

“In 1936 the crowd was against Jesse Owens. We’ve not seen this since. We have to deal with it,” Lavillenie said. However he did apologize later and explained his anger to be the reaction in the heat of moment.

Yes, sorry for the bad comparaison I made. It was a hot reaction and I realize it was wrong. Sorry to everyone. https://t.co/rK5mmuMgqH

Although, Thiago Braz and Sergei Bubka maintained the spirit of sportsmanship by consoling Renaud Lavillenie after the award ceremony. However Rio Organizers did admit that the Brazilian fans’ treatment for Lavillenie had crossed the line.

“As citizens of Brazil and as sports fans we don’t think booing is the right attitude, even when you are in a one-to-one competition and a young Brazilian has the chance to beat the world champion. We plan to intensify our dialogue with Brazilian fans through social networks to make sure that we behave as fans in a proper and elegant manner, without losing the passion for sport.”, Rio 2016 chief spokesman Mario Andrada said.

USA Women’s 4X100 Meters Relay Team Ran A Race Without Any Opponents And Qualified For Finals – REASON IS . .
Being Super Happy With Sindhu, Coach Gives Back Her Phone & Allows Her An Ice-Cream!