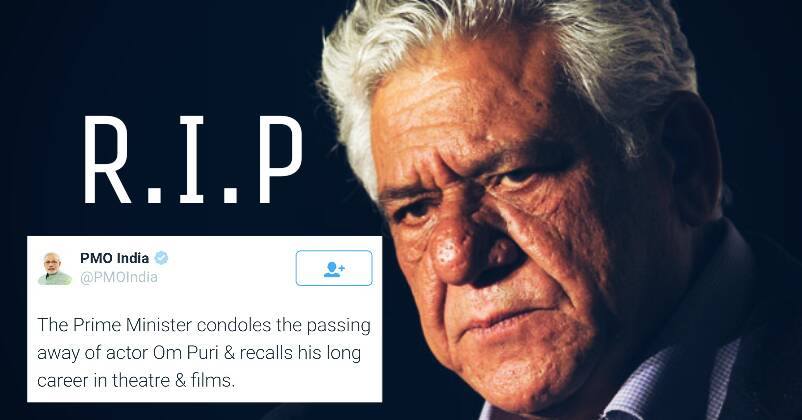 Veteran actor Om Puri is no more! Yes, he got a massive heart attack this morning and passed away at the age of 66.

Ashoke Pandit, the filmmaker, who happens to be a very good friend of Om Puri gave confirmation of this news on Twitter today morning. Everything was going well; Om Puri returned home after a shoot last evening. However, his door bell went unanswered today morning, after which the driver informed everyone. As of now, the actor’s body is at his Andheri residence and colleagues and B-Town actors have arrived for paying their last respects. He will be badly missed; his performance in Hollywood, British, Pakistani and Hindi cinema was mind-bowing.

Here’s how the PM and celebrities reacted on this news!

The Prime Minister condoles the passing away of actor Om Puri & recalls his long career in theatre & films.

Seeing him lying on his bed looking so calm can’t believe that one of our greatest actors #OmPuri is no more. Deeply saddened & shocked.

Om Puri! You have left us all too early.. i am so so sorry..The fun the laughter the arguments so vividly etched in my mind..Will miss you

My deepest condolences on the passing away of one of the most versatile actors of Indian Cinema , #OmPuri ji pic.twitter.com/hZN2pL6Ejo

Shocked beyond words to learn that #OmPuri ji is no more. Will miss you sir. Condolences to the family. RIP #HugeLoss pic.twitter.com/REq9vDrtkk

Condolences on the passing away of one of our finest ever actors #OmPuri pic.twitter.com/gBCK6mWwLF

RIP Om Puri.
We have lost one of our finest.
A talent, A Voice, A Spirit.
Will miss you Puri Saab.

Shocked and saddened to learn that #OmPuri Ji is no more. You will be missed. Condolences to the family. RIP.

Shocked & saddened to wake up to the news that #OmPuri has passed. We have lost a brilliant & talented artist. You will be sorely missed.

Sad to hear about the passing of the massively talented Om Puri. May god give peace to his soul & strength to his family #RIPOmPuri 🙏

So long Omji. Prided myself on being his friend peer & admirer. Who dare say my Om Puri is no more ? He lives through his work.