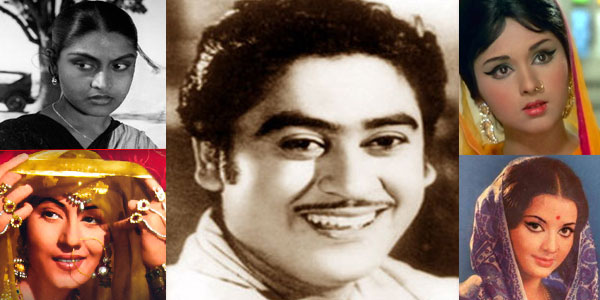 Shakespeare has said, “Sometimes odds prove you lucky” and this has seriously proved in  some cases of the Bollywood celebrities who have married thrice and surrendered themselves to their third wife. Let’s have a look on these celebs who didn’t marry twice, but found real love with their third wife’s, check them out here.

1. Kishor Kumar: Kishor kumar was married to Ruma Guha after which he got committed to Madhubala and  then married to Yogita Baali. But,  finally found love in his fourth wife Leena Chandavarkar . 2. Sanjay Dutt – This superstar got married to Richa Sharma and then to Rhea Pillai and got divorced for third marriage with Manyata 4. Lucky Ali- His first wife was Meaghan Jane McCleary and he got married twice with Inaya. Later, got married for the third time to a British Model in 2010. 5. Vidu Vinod Chopra:  First wife Renu Saluja , his second wife was Shabnam Sukhdev and both the marriages ended in a divorce. Chopra soon met Anupama and decided to get married for the third time. 6. Adnan Sami: He married actress Zeba Bakhtiar but divorced and then married to Sabah Galaderi in 2001.  He got married for the 3rd time to Roya Faryabi. 8. Kate Winslet 1st married director Jim Threapleton and then to director Sam Mendes. They got divorced and she tied knot 3rd time in 2012. 9.Nicolas Cage: He married actress Patricia Arquette and then to Lisa Marie Presley. But, they divorced after two years and then he got married to waitress Alice Kim. 10.Jennifer Lopez’s 3rd marriage was to musician Marc Anthony. She was also previously married to Ojani Noa; while her 2nd husband was Chris Judd. These Celebs have married again and again to find their love for life. Do express your views on this.