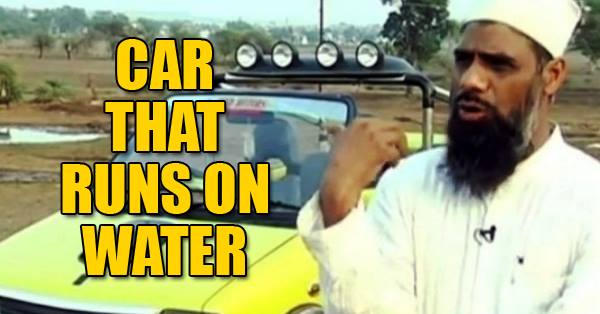 Mohammad Raees Markani has brought a revolution in the field of automobiles by inventing a car that needs water rather than petrol to run. Raees (44) is a car mechanic by profession for the last 15 years and as far as his education is concerned, he is just a 12th pass out but in just 5 years, he made a car which runs on a gas called acetylene. This gas is a result of a chemical reaction between water and calcium carbide.

As per Mirror, Raees was working on 800 cc engine and was making changes since 5 years and now he is sure that he the final product is made. So basically, Raees’ car needs water and carbides as its fuel requirements. What’s more, he has patented his invention. Raees told Mirror, “The gas is used for several industrial purposes including welding and portable lighting for miners. But in my case, I am using it to propel the car engines. I have made other changes to the engines, which helps the overall performance of the car. So basically, it is just about the water.”

Raees further adds, “The market for environmentally friendly cars is getting bigger and automobile companies around the world are looking for eco-friendly ways to reduce pollution. So a car like mine can be a good alternative. It costs close to nothing to operate and it is environment friendly.”

Raees’ invention attracted the Chinese automobile companies also and they have sent him invitation for working on the idea and developing it further but every company who is interested in working on Raees’ idea will need to fulfill one condition which is that the plant for manufacturing new cars has to be set up in his hometown in MP. In his words, “I want things to change in my hometown. So this is where my work should continue.”

Here’s a video on Raees by “History”:

This Is What Dravid And Gavaskar Think About Shifting IPL Matches! Don’t Miss Out Their Comments!
Mark Zuckerberg Bought Domain From Kochi Engineering Student For Just $700