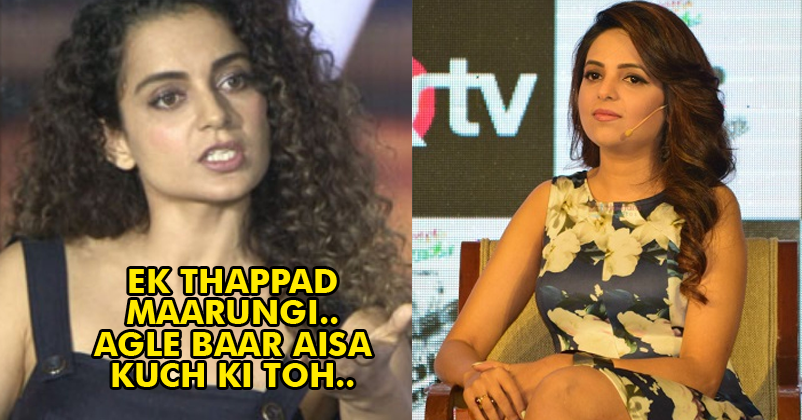 Comedy is always meant to make people happy. But nowadays, it’s not that easy to bring a smile on everyone’s face. Somewhere down the line, someone has to take its burden. Some people call it ‘insult comedy’ while some tag it as a ‘normal comedy’ for which many people unnecessarily get offended. The Kapil Sharma Show is usually meant to be a light-hearted program with a maximum dose of laughter, but the latest episode didn’t go so well. The ‘Rangoon’ movie stars, i.e Shahid Kapoor and Kangana Ranaut were invited to the show. The show was doing fine until Kangana Ranaut or more precisely her speaking accent came into the picture. Kangana Ranaut is known to be one of the cutest actresses in our Bollywood and what adds up to her cuteness is the cute and childish accent that she has. However, many comedians nowadays strike on such points so as to mimic such actors and actresses. Sugandha Mishra plays a role of a teacher in The Kapil Sharma Show. Singers Salim Merchant and Shaan also appeared on the show and started to pull Sugandha’s leg and asked her to mimic Kangana. On their request, Sugandha started mimicking Kangana Ranaut in front of her. This left Kangana in utter frustration. As per the source, Kangana didn’t take this mimicry act in a sporting manner and with a harsh tone commented, ‘I feel like slapping her’.

However, Sugandha didn’t take her words seriously and continued with rest of the show. According to one of the source, ‘It was a nail biting moment after Kangana’s shocking statement. It surely was an awkward moment for Sugandha, but she took it in a sporting spirit and continued with the shoot.’

Well, it is quite understandable that no one likes to see someone else making fun of them. But one needs to understand that the genre of the show is ‘comedy’ and hence, anyone can be under the radar. Just because someone is making fun of you and making you feel offended, that doesn’t give you the right to physically threaten or abuse him or her. However, it should be noted that Kangana Ranaut didn’t do anything and kept her calm even if she expressed her anger through the harsh words.

What are your views on her choice of words? Please share your opinion in the comment section below.