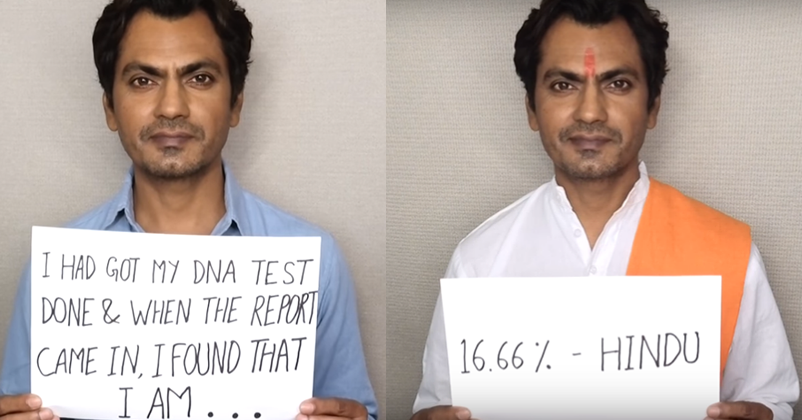 It won’t be wrong to call Nawazuddin Siddiqui an absolute gem, as he never fails to stun us with his amazing acting skills as well as extraordinary thoughts. Whenever we think of him as a great actor, he comes up with another remarkable talent that leaves us in awe. He is truly incredible! There is no denying the fact that the world is full of hatred and discrimination on the basis of cast, creed, color and religion has been destroying the planet to a great extent. However, amidst this all, Nawazuddin Siddiqui has come up with an excellent video to show the world his true religion.

The video shows Nawaz holding different placards to spread a message which is a must read for all of us. Initially, he said that he got his DNA test done and it revealed that he’s not a complete Muslim but a combination of all the religions of the world equally; nevertheless, he’s 100% artist and that’s his actual religion.

Nawaz even shared the video on Twitter with caption, “Sixteen Point Six Six…”

What an amazing message! Hats off! #Respect

What do you have to say with regard to the video? Share your views in the comments section below.

This Wedding Dance Of The Bride Is Winning Hearts All Over, Watch How The Groom Watches Her Dance
You Can’t Stop Laughing After Watching What These Pranksters Did At IIT-Kanpur