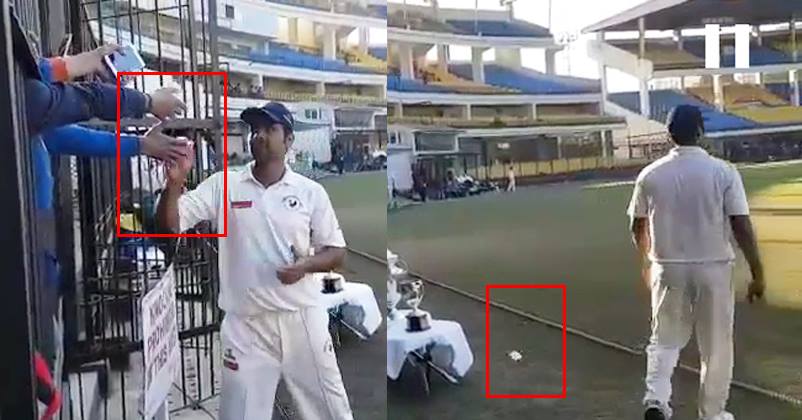 Not everyone has a huge fan following and only lucky ones get to enjoy this amazing feel that a number of people are there to cheer and pray for them. In fact, it won’t be wrong to say that before becoming celebrities, individuals see the dream of many fans who are crazy to take their autographs and click selfies with them.

However, sadly, few celebs probably don’t know how to live this phase to the fullest and out of anger, do such things which gradually decrease their craze among fans.

The same seems to be the case with Rudra Pratap Singh, the 32-yr fast bowler. What he did during Ranji Trophy final might fill you with disgust. In an unfortunate incident on Friday in Holkar stadium, RP Singh was seen on camera seizing smartphone of a fan while fielding on the boundary line and throwing it away. The saddest part was that the fan was a kid and he was asking RP to take a selfie.

It all happened on the 4th day of the match which was played between Mumbai and Gujarat. The kid was trying to extend his hands, saying, “photo please, ek selfie lelo, ab tumhe Gujarat ko support karna padega.” (Please click a selfie of us from my phone, now you will have to support Gujarat). As per the reports, just a day before this, he raised his middle finger and showed it to someone in the audience and this was the second incident in which RP Singh showed his aggravation.

RP Singh has played 14 Tests, 58 ODIs and 10 T20Is in his International career apart from an important role in the Indian victory of ICC World Twenty20 triumph in 2007, under the leadership of MS Dhoni. Last time, he wore Indian cap in 2011 at Cardiff against England.

What do you think of this act by Singh? Let us know your views in the comments section below.