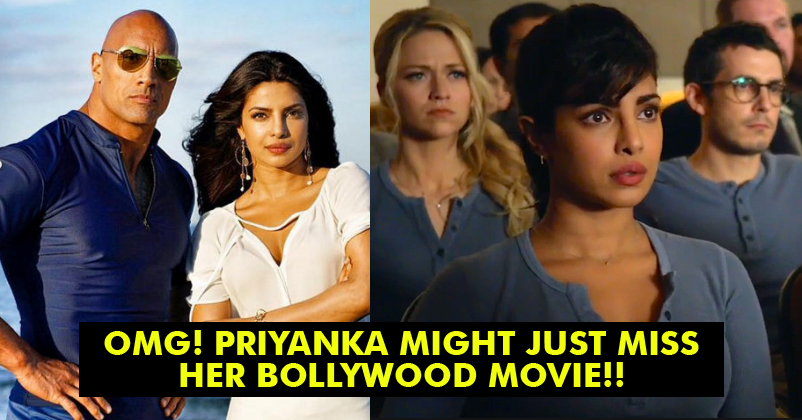 Priyanka Chopra must be feeling like living at the top of the world where she can see all her hard work that she did to accomplish such a feat. Hollywood is certainly not a benchmark for an actor’s success but is definitely an indicator about his or her worldwide popularity. After performing many gigs with Pitbull in songs like ‘Welcome To My City’ and ‘Exotic’, she has broken into the world of Hollywood by signing many movies and series like ‘Quantico’ and ‘Baywatch’. However, after signing these projects, she has been lately off the Bollywood Silver screen where her last performance was seen in Prakash Jha’s movie ‘Jai Gangajal’. There is no denying the fact that her Hollywood project commitments are affecting her Bollywood projects in a way or so.

Today, Hrithik Roshan and his father Rakesh Roshan held a press conference with the duo surprised their fans with the announcement of the next installment of the KRRISH Movie – KRRISH 4. The movie is expected to be released on the Christmas of 2018. Now what is troubling is the fact that the busy schedule of Priyanka Chopra and her jam packed projects in the year 2017-18 for the shooting of ‘QUANTICO 2’ may affect in the making of KRRISH 4 movie. And we can’t miss out the fact that her next movie project is ‘BAYWATCH’ which will be releasing on May 19th 2017. The shooting for the movie is still not complete and given the fact that she will be busy for the promotion of her movie, making out time for KRRISH 4 is still in question.

Forbes has declared her name among the top 10 Highest Paid TV Actresses which also hints that many Hollywood directors and producers will be looking out for her talent in the coming future. She is certainly going to be on a busy roll and in many dilemmas too ! !

Way back when she was in India earlier this month, she happened to meet Karan Johar, Sanjay Leela Bansali, Zoya and Farhan but no movie was signed in the end. But that doesn’t mean that she is ignoring Bollywood films. As a professional actress she is very particular about her career and hence wants the best out of the cream ! !

“I am not only saying no to Bollywood films. I have also turned down more than six Hollywood films. I am rejecting films across industries. I’m going to pick the best and do only one film from each side next year. Even that would mean pushing myself against time. But I’m a 70mm girl who can never give up Hindi films.Main toh apni TV series bhi 70mm pe dekthi hoon.”, Priyanka Chopra in an interview.

And here is what she posted in her instagram account just a month ago which is indeed quite a matter of concern for Hrithik Roshan as well as for Rakesh Roshan. However, we all hope that she does manage her time for the Krrish 4 movie as her Indian fans are indeed dying to see her back again in the silver screen with her witty and charming acting.