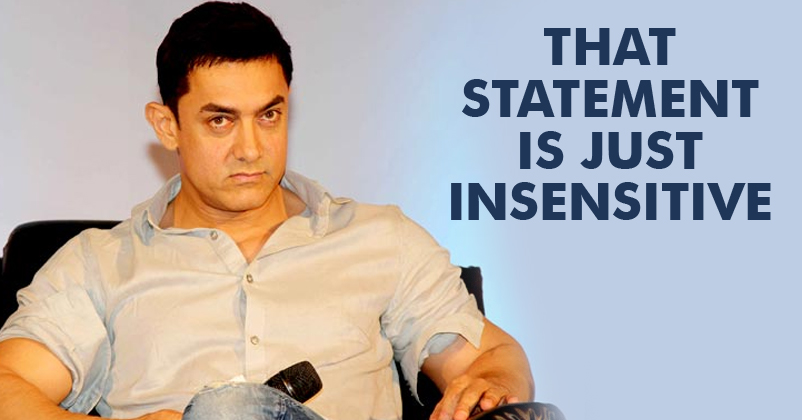 Aamir Khan’s big blockbuster movie ‘Dangal’ is all set to release and today on a promotional event he set the stage on fire, TWICE.

The first one was when he launched the poster of his new movie ‘Dangal’.
Have a look ! ! Well, we can talk about the poster later, let us come to the main point.

A reporter asked him about what he had to say on Salman Khan’s recent rape remarks.

Now Aamir Khan is known for his straight forward honest views and frank opinions, and today was no exception.

He said, ‘Well as per the media report whatever I have read which quotes him saying certain thing, I feel what he said was rather unfortunate and rather insensitive‘

The reporter later on asked him about whether he and Salman talked about this issue to which Aamir Khan replied, ‘No I have not spoken with him and who am I to advice him‘

Check out this video where he made this remark on Salman Khan’s Rape Comment ! !

Well this is certainly the first when a B-Town Top ‘A’ listed celebrity has shared his views openly out in media which does criticizes Salman Khan’s choice of words.

Recently Shah Rukh Khan was asked the same question but he rather chose a more diplomatic answer.

He said, ‘There is wrestling which is common, nothing else. But I loved the look of ‘Sultan’. It does look like an excellent film. I hope it does really well’

SRK Talks About Pay Disparity In Bollywood! You’ll Love The Solution He Has Put Forth
Want To Know Amrita Singh’s Reaction On Kareena’s Pregnancy? Well It Is Too Fiery!