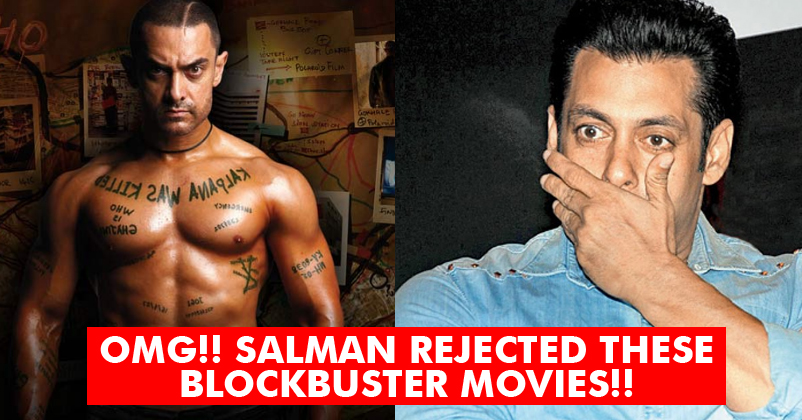 Because the Sultan fever is not gone, here we brought you some of the movies that were REJECTED by Salman Khan.  Check out the list here.

Did you know Salman Khan was the first person to be offered the role of Aamir Khan for the movie Gajni? In fact after reading the script Aamir Khan said that this role should be taken up by Salman Khan and not him. However, Aamir managed to nail the role perfectly. Remember the Bindaas Max from the movie, Josh? Well, this was brilliantly done by Shahrukh Khan but here are some inside details. Yes, you guessed it right. This role was given to Salman Khan but due to certain date issues Salman Khan lost it. It would be a little shocking that the role of Ajay Sharma was initially offered to Salman Khan.Yes, we are talking about the same Abbas Mastan blockbuster that ended up bagging various records with SRK in lead role. Popular Indian movie, Chak De India went forward to bag various awards was initially offered to Salman Khan. However, due to certain circumstances, this movie slipped from Salman’s hand and was eventually given to Shahrukh Khan. Once again an SRK movie included in the list. But this time,Salman Khan was not offered the role of Shahrukh Khan but it was for Saif. The role of Preity Zinta’s fiancé Aman was first offered to Salman Khan. Because Salman Khan preferred for lead roles, he eventually rejected the contract. Upcoming movie of Karan Johar, Shuddi was already signed by Salman Khan but the actor later rejected it as he did not want to take up any project for his final verdict on the 2002 hit and run case. However, the role is passed on to Varun Dhawan. Continue Reading
You may also like...
Related Topics:OMG! These 7 Blockbuster Bollywood Movies Were REJECTED By Salman Khan!

10 Actors Who Went Too Far For Their Role
Once Again Troubles Surface For Salman Khan! Missing Driver Found…