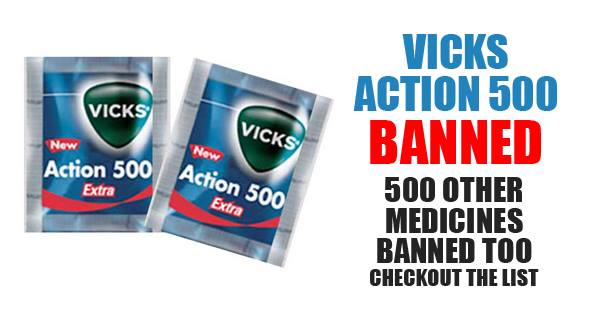 Nearly 500 medicines are under the risk of getting banned in India for being “irrational”, of no-use and they are not even safe for consuming. The ministry has already enforced a ban on 344 fixed-dose combination (FDC) drugs last week, which also includes commonly used cough syrups such as Corex, Benadryl and Phensedyl.

As per a senior official, more than 6000 products are being assessed by the ministry and minimum 1000 FDCs are listed under “severe scrutiny”. Most probably, around 500 medicines will be banned in the coming six months.

A senior official stated, “There is primary evidence in around 1,000 cases, which shows these are irrational FDCs. However, in some cases, the data is incomplete so we have asked for further studies. In around 500 cases, we are at the last leg and waiting for some documents.” The health ministry is taking these measures as it strongly believes that these “irrational” FDCs are resulting in anti-microbial resistance and in fact in some of the cases, it is leading to the failure of the organ as the toxic levels are very high. Not only this, the easy availability of these drugs without doctor’s prescription is resulting in wrong use of the medicines.

The official further added, “Our objective is to ensure only safe products are available in the market. We have reviewed products for several times and there is evidence from research papers and studies to show these medicines are irrational combinations.”

On the other hand, pharmaceutical company Pfizer went to the court to challenge the ban imposed on its cough syrup Corex and it was also given a stay order by the Delhi HC till further hearing. According to pharmaceutical companies, most of the drugs banned by the ministry were available in India for more than 30 years so they must be safe as no cases have been reported so far.

However, the health ministry has rejected this argument by saying that long life is not a parameter to prove the safety, as the official said, “Just because adverse events have not come to notice or have not been reported so far does not mean we ignore scientific evidence showing discrepancies.”

According to health specialists and officials, patients usually don’t report about the harmful or bad effects of such medicines and prefer not to revisit the doctors provided that they have been using these drugs for a long time and suffer serious health defects. Another reason for harmful effects not being reported is the weak system of monitoring.

If these 500 drugs get banned, the losses will get huge for the pharmaceutical firms as they are already bearing the loss of Rs. 3,800 crore due to the ban on 344 drugs. As per the industry experts, the amount of cumulative loss may reach the figure of Rs. 10,000 crore while the value of total retail market of pharmaceuticals per year is Rs 1 lakh crore.

Well, this is a good sign that the Indian health ministry is being pro-active and taking steps to ensure the safety of Indian citizens which eventually will lead to a better India!!