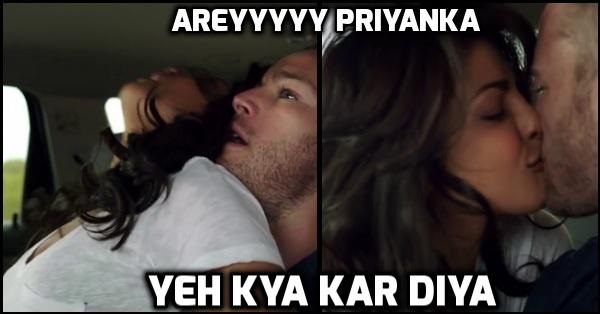 Priyanka Chopra is all set to make her Hollywood debut with the upcoming ABC’s Quantico. This versatile actress who plays the role of a FBI agent in the show will be seen in very uncomfortable scenes in the show. Priyanka Chopra has admitted that she wasn’t comfortable at all with such steamy red-hot scenes, she was shy and unsure at first, she felt awkward while filming such scenes. But since it’s an American show, and the character she is playing Alex Parrish, who is depicted as quite independent and free-spirited, who ‘treats boys the way boys treat girls’. Priyanka Chopra is also the first Bollywood star to headline an American TV show. The show is set to air on 27 September, Quantico is a drama about a group of young FBI recruits, who are training at the FBI Training Academy in Quantico, Virginia. Among the recruits, one is suspected of masterminding the biggest attack on New York since 9/11. When the trailer of the show was released it soon went viral because Priyanka Chopra is seen doing a love-making scene in the trailer. This intimate scene will be featured in the first eight minutes of the first episode of the show. According to a report published on Bollywoodlife.com, when talked about her character Alex Parrish that she’ll be playing in the upcoming TV series. Priyanka says,

“Alex is like my alter ego. I am very shy in comparison, though I maybe outspoken in private. Alex doesn’t care at all about anything. She lives life on her own terms and is very courageous. I don’t think like her. But as the series progresses, Alex will be shown more and more like me. The writers will be writing more of me as an Indian girl, Priyanka, my persona and who I am.”

Over 800 Dead & 1000 Injured. Helpline Numbers For Makkah Released
Video Shows Suicide Bomber Bursting Into Tears Before Going For A Fatal Attack In Syria