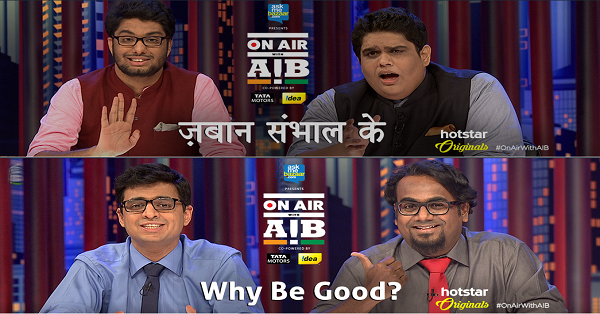 Yes! The pilot episode of On Air With AIB has finally premiered today on Hotstar.

In this first episode of “On Air With AIB”, the team of All India Bakchod has very smartly raised the topics we all want to talk about, people are frustrated about and still are afraid or hesitant to take any actions thinking “Why Be Good?” Why we be the “Whistleblower”.

This show, “On Air With AIB” is 10 episode show which is going take serious political and social issues, churn them with the best of humour ingredients and finally present to you, what we call it an Indian version of John Oliver’s Last Week Tonight.

Where the english version of the episode is called, “Why Be Good”, the title of hindi version seems to be inspired by a very old comedy show, “Zaban Sambhal ke”.

Starting from the Vyampam Scam to Beef Eating, they have included many social and political issues.

Not restraining themselves to just deliberation, “On Air With AIB” has also included a spoof on being a whistle blower in our country, followed by an interview with Dr. K Padmarajan, who holds a Limca World Record for losing most elections ever.

Believe it or not, the episodes of “On Air With AIB” are going to be most awaited thing for next few months. While the pilot episode is available on Hotstar in both Hindi and English, it will hit the television on 1st November on Star World and Star Plus at 10 pm.

Why wait till then, watch the pilot episode of “On Air With AIB” right away.
To watch the English version, Why Be Good? – Click here
To watch the Hindi version, Zaban Sambhal Ke – Click Here