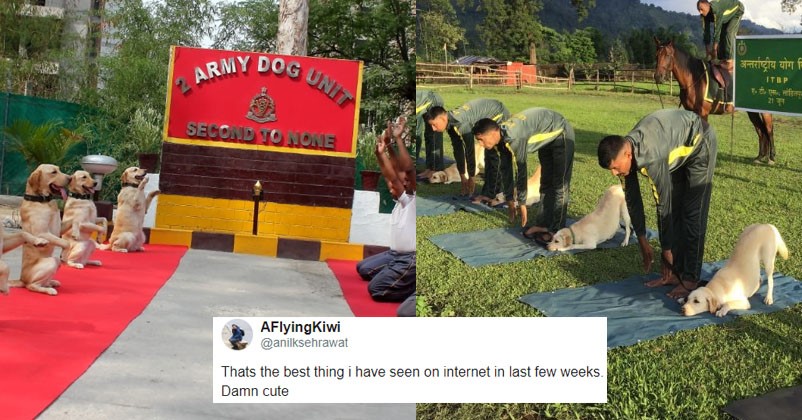 International Yoga Day is observed on 21st June and the world has come together to spread the awareness and celebrate the occasion. Social Media is flooded with pictures starting from Bollywood celebrities, head of our country, to the jawans. Just to make the world aware of the unparallel benefits of Yoga.

On this International Yoga Day not only humans but our favourite animal dogs are also determined to keep the body, mind and soul relaxed. It’s true and I ain’t lying!

Today the pictures went viral of the army dog squad of the Indo – Tibetian border police personnel and also the ITBP troops of Arunachal Pradesh were seen doing a few yoga poses. How cute isn’t it?

#WATCH Dog squad of Border Security Force performs yoga along with their trainers on #YogaDay2019 in Jammu. pic.twitter.com/TTN2vAgbeS

Every dog lovers and desi twitter is lauding the Army dog unit for practising Yoga on International Yoga Day with their trainers:

Awww… look at the first one with tongue our camera savvy guy. He is so cute 😍😍😍

THIS IS FANTASTIC! MY DOGS IF WANT TO LISTEN, THEY OBEY, OTHERWISE THEY LOOK AT D OTHER SIDE.

Army Dogs are better than some people in our country. They never betray Homeland.

Excellent. It is a God's gift ,sending this animal to us.

Dogs are best ones🤗🤗

WHY SO CUTE DOGGOS?