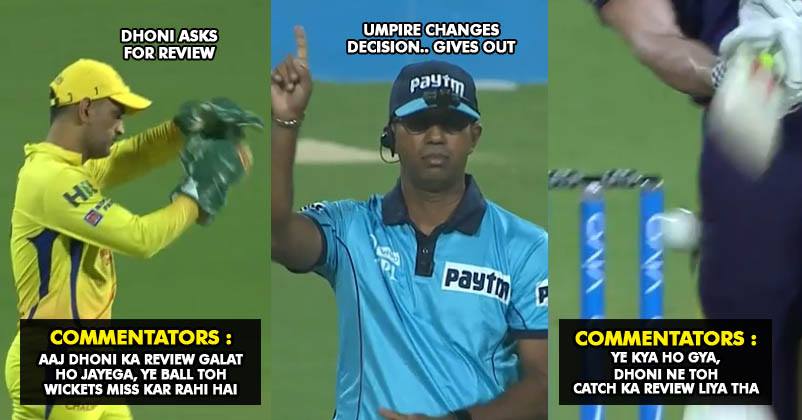 DRS is rightly known as Dhoni Review System and we all know the reason for it. He accurately asks for DRS when needed and many a times, decisions are given in his favor.

Even in yesterday’s IPL match against KKR, Dhoni showed his DRS skills and we were impressed. In the last ball of the 1st over (Kolkata batting) that Dhoni asked for DRS. This is when Lungi Ngidi was bowling and Chris Lynn nicked it.

The ball happened to hit the thigh pad & Shane Watson took a catch. Both Watson and Ngidi made appeals but umpire didn’t give out.

Dhoni was convinced that he is out (Catch out). Commentators thought that he took LBW review, which is why they said that this time Dhoni took the wrong DRS. After replays, it was clearly seen that the ball took an inside edge before it hit the pads.

Umpire changed his decision gave out to Lynn and once again, Dhoni’s DRS proved to be accurate. Commentators changed words and said that “Dhoni had taken catch review and not LBW review”.

Click here to watch the video directly on IPL site.

CSK definitely benefited from this DRS and we are sure you too will agree.

Continue Reading
You may also like...
Related Topics:CSK, Dhoni, DRS

Fan Breached Security & Touched Dhoni’s Feet. This Is How Other CSK Members Reacted
Daily Diet Of Your Favorite Cricketers, It Shows They’re Very Particular About Their Fitness