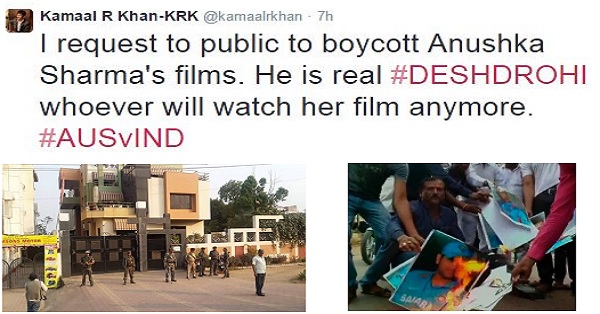 Sad, Sad, Sad 🙁 🙁 🙁 Yes, we all are very unhappy that India lost the match today, but what is even more disappointing is the fact that India did not even put up a good competition, it seemed like as if they have lost all the spirit and energy after the first 10 overs. But still whatever, be the scenario at least I am very proud of the Indian Cricket Team mean while there are some other Indians who have taken it to Twitter and other way to show their anger against the defeat of the Team India. Unfortunately WE HAD TO GIVE IT BACK 🙁

It is Anushka all the away to be blamed !

Yes, Anushka has been declared the Panauti by many. Memes and trolls are going viral. People are abusing and passing all sorts of comments on the presence of the Bollywood actress, who is dating the Indian Cricket Magnum, Virat Kohli.

This is the least we can expect from the Mocker of Twitter.

And , It was more than Expected

It is so brave on the part of Indians to blame Anushka Sharma, for the 1 run off 13 balls by Virat Kohli – “Slow Claps” 😛 We just wonder when Virat scores giant runs, where are these people at that time.

Security buffed up outside Dhonis and Rohit Sharma’s House.

Indeed, this was needed and an important call of action. Measuring the anger among the Indian, we can be never sure how badly they treat and welcome back the Indian Cricket Team. We just cannot accept the defeat and enjoy the sport in spirit. High security have been allotted to the Team India Cricket Players who will be returning back.

Reaction 3 – The dangerous One

While there are some who are die hard fans of cricket, All logics, reason, and everything that hinders and defy them needs to be mixed with dust.
And that is what they did with the TV Sets today. Aggression can be seen on road on the defeat of Team India. What We Should Actually Do

Fine India has lost the WC now, So WE should now stop playing Blame-Game. And, like Matures deal with it and behave Like a Typical Indian, Feel Hopeful Next Time

There are more major concerns that we should be worried about, and also be proud that we have a Bleeding Blue team who take stand against Women, which are getting defeated everyday by the law and by some morons.

Cheers to the Indian Team, We LOVE u and will LOVE u.

Is it really fair to blame some one? Cant we take the defeat sportingly?