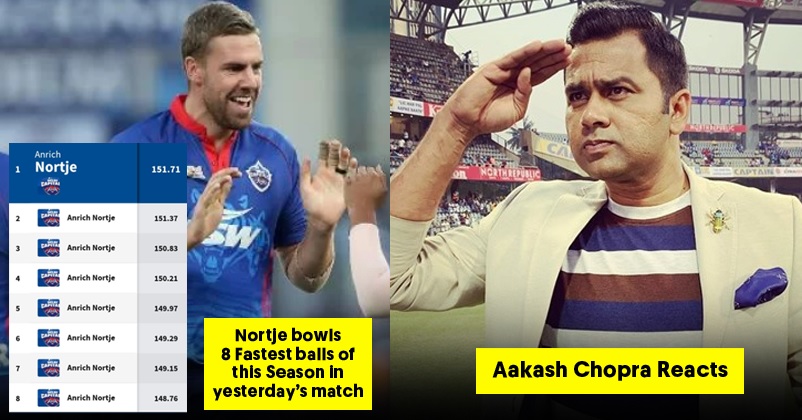 The South African cricketer Anrich Nortje got all the attention in yesterday’s IPL match which was played between Delhi Capitals and Sunrisers Hyderabad as he not only won the player of the match award but also bowled eight fastest deliveries of the league. 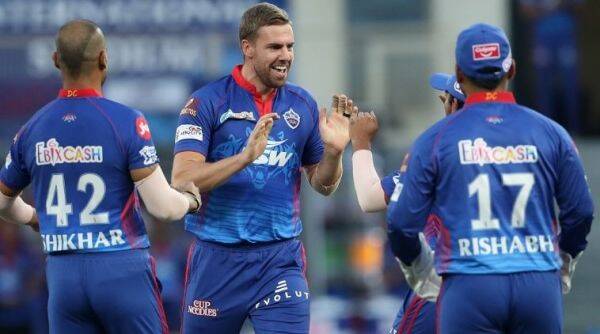 Surprisingly, Anrich Nortje went unsold during the IPL 2020 but after Chris Woakes pulled out of the tournament, DC signed Anrich Nortje and he ended the IPL 2020 as the second highest wicket-taker with 22 wickets. However in the IPL 2021, he didn’t get the chance to play for his team in the first leg but as he got the opportunity in yesterday’s match, he stole all the limelight.

In DCvsSRH which was played at Dubai International Stadium, the 27 years old cricketer took two important wickets of David Warner (0) and Kedar Jadhav (3) and gave away only 12 runs in his 4 overs. Anrich Nortje recorded four deliveries which were above 150 km/hr, the highest being 151.71 km/hr.

The former Indian cricketer Aakash Chopra made a funny tweet in regard to Anrich Nortje’s pace bowling. He shared a tweet which displayed the top 8 fastest deliveries bowled by Anrich Nortje in this season of the IPL and wrote, “Over-speeding ka challan kato” (Fine him for over-speeding).

As far as the yesterday’s match is concerned, SRH won the toss and decided to bat first. However, the start of the SRH innings was not good as David Warner got out on duck and the whole team managed only 134/9 in their 20 overs. In reply, DC lost Prithvi Shaw (11) early but Shikhar Dhawan (42), Shreyas Iyer (47 not out) and Rishabh Pant (35 not out) played good knocks and ensured the victory of their team.

DC is at the top of the point table with 7 wins in 9 matches while SRH is at the bottom with 7 defeats in 8 matches.