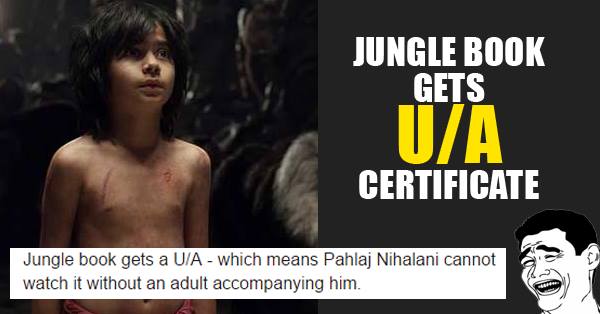 The Indian censor board has previously too surprised public but this time, it has done something which has left people shocked and speechless. You must be wondering what could be that? So here you go!

The censor board has given The Jungle Book a rating of U/A which is beyond all reasons and logic for kids and audience alike. This movie is based on the book written by author Rudyard Kipling and it is the story of a boy who got separated from his parents and was brought up by the animals. The rating of U/A implies that the movie has little bit of violence, sensuality or the language which has been used in not suitable for kids below the age of 12. People are expressing their outrage and criticizing the censor board and its chief Pahlaj Nihalani for this decision as they are not able to digest the fact that how a movie which is basically meant for kids can be unsuitable for children below 12.

Pahlaj Nihalani feels that the kids can get frightened watching this movie as he said, “The 3D effects are so scary that the animals seem to jump right at the audience.”

This is how Twitter trolled the censor board chief Pahlaj Nihalani:

The only thing scary in Indian Cinema these days:

Huh? Pahlaj Nihalani gave #TheJungleBook a UA rating for being “scary”? The only thing scary in Indian cinema these days is #PahlajNihalani

So kids, target audience for the movie, cannot watch #JungleBook because #PahlajNihalani thinks it's "too scary!" pic.twitter.com/s4bIP8JPxZ

#PahlajNihalani feels #TheJungleBook is scary enuf to give it a U/A cert
Wonder what he gives to himself on looking into d mirror? CENSORED!

Pahlaj Nihalani : The animals jump at you from the screen.
Every other person : Its called 3D, you idiot!

Jungle book gets a U/A – which means Pahlaj Nihalani cannot watch it without an adult accompanying him.

Nihalani is better than any stand up comedian:

Pahlaj Nihalani never fails to amuse me, he is better than any stand up comedian across the globe. Now Jungle Book us U/A because its scary!

Pahlaj Nihalani gives a UA to #TheJungleBook, the quintessential kids story, citing it's too scary. When will he stop embarrassing himself?

Just because Nihalani got scared:

#TheJungleBook is apparently unsuitable for kids under 12 because the 3D effects scared #PahlajNihalani! 😀

#TheJungleBook has been given UA rating by #PahlajNihalani Coz he thinks the 3D scenes are scary 😂😂. What a nutcase!!

Better he did not give it A rating:

What happened to Pahlaj Nihalani? U/A certificate to Jungle Book! Thank God it's not A. Non of the chimps, monkeys, hyenas wearing clothes.

Flowers blossomed in their underwear:

#India: Why an U/A rating for #TheJungleBook? #PahlajNihalani: Because flowers have blossomed in their underwear!#CensorBoard

Akshay Kumar Detained At Heathrow Airport & You Won’t Believe What He Did
This Video Makes Every Man Realize How He Should Treat His Girl! Do Not Miss To Watch It!