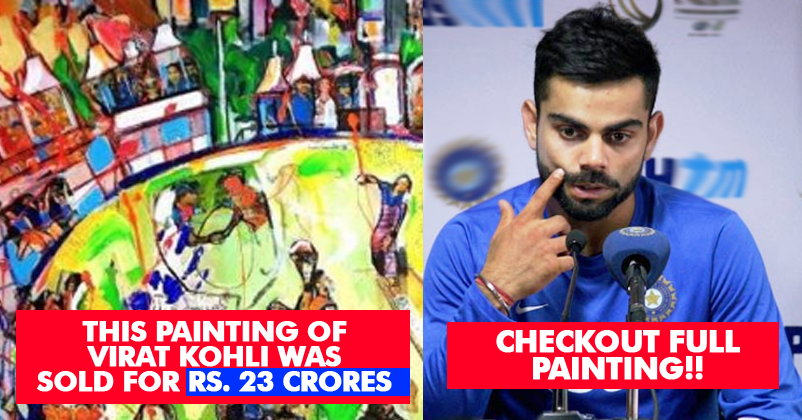 Recently, Virat Kohli has been in news for his big endorsement deals but the good thing about the captain of the Indian cricket team is that he is also involved in noble and charity work. He has set up a foundation named Virat Kohli foundation for the purpose of carrying out social work.

Just lately, a painting which speaks about the IPL Journey of Kohli over the last 10 years has been bought by a British Indian entrepreneur Poonam Gupta, the CEO of PG Papers which is based in Scotland. The painting was made by Sasha Jaffrey and bought for a whopping amount of 2.9 million pounds during the charity dinner which was organized by VKF.

Sasha is one of the most popular and awarded painters of the present times. He has also worked with Yuvraj Singh, MS Dhoni, David Beckham and others for their charity work.

The charity dinner got controversial when the defaulter Indian businessman Vijay Mallya attended it; however, the Indian team left quickly after the arrival of Mallya to avoid any controversy. “What I like about this young generation of Indian cricketers is that they are responsible and want to make difference on and off the field. I am very connected to the cause taken up by Virat. Slavery has no place in this world and we need to stand up and do our bit. I am glad Virat has come forward against this evil and by buying this magnificent piece of art created by my favourite artist Sasha Jaffrey, I tick two boxes. I take a rare master piece to my home and also help this noble cause in my own way.”

In case you get to know whether it is £290,000 or 2.9 million pounds please help us with facts in comments section

We love you Kohli!

Bhajji Lashed Out At Zee News & Called Them “Zee Faltu News”! Here’s What They Had Reported!
Salman’s Response On Indo-Pak War Is Amazing! You’ll Respect Him After Watching Video!