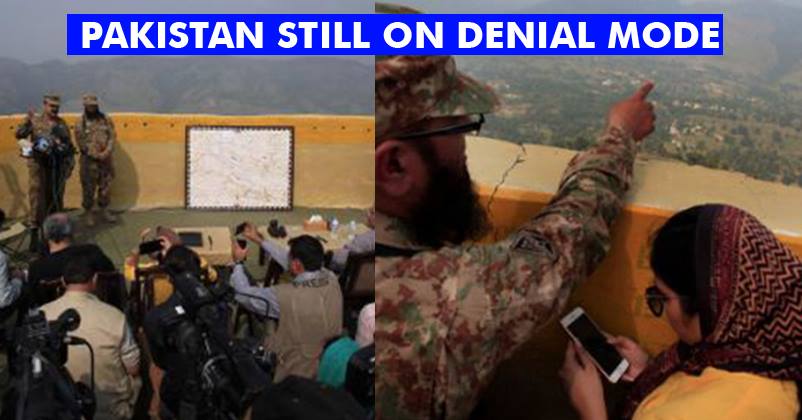 People say that when you believe in yourself, you don’t have to prove anything to the world. But Pakistan has some different moral values for proving their point no matter how useless, baseless and senseless it is. Indian Army conducted a surgical strike in the early morning of 29 September 2016.

The strikes were made public by the Joint Secretary in the Ministry of External Affairs, Vikas Swarup, along with the Director General of Military Operations, Lt Gen Ranbir Singh, at a press conference on Thursday morning. However, Pakistan was quick to react on it and denied the occurrence of such surgical strikes in their territory. World Media was indeed confused. And in order to prove their claims, Pakistan Government and its Army took the International and Local Media to the Line of Control (LoC) to ‘prove’ that India didn’t conduct any surgical strikes across it in Pakistan The French news media house – Agence France Presse (AFP) called this ferrying of journalists by air as “a rare step” by Pakistan. They said, “The army took the rare step of flying international media to the ‘de facto’ border to make its case in a battle of competing narratives”

Lieutenant General Asim Bajwa, a spokesman for the Pakistani army addressed the media by saying that this brief visiting to the LoC was conducted so as to prove that no such surgical strikes happened and India’s claims of such strikes were “white lies”.

According to Wikipedia, Pakistan claimed of killing 8-14 Indian soldiers while successfully capturing one. They also claimed that in this CEASEFIRE VIOLATION from India’s side, 2 of their own soldiers died followed by 9 casualties. However, according to the same Wikipedia page, it is also mentioned that India claimed of killing 35-40 terrorist in its surgical strike followed by 1 or 2 casualties of its soldiers.

Lieutenant General Asim Bajwa sparked controversies by saying that no such incident took place nor any such will be allowed to happen in future and if such plans are attempted by India, it will be responded to with an ever strongest force.

He even went on to ask several cross questions to Indian Army about its surgical strike and warned that the Indian Army should be “sure-footed” while making such statements on sensitive matters. According to Media Houses, he also said that if India’s surgical strikes have caused so much of damages as per claimed by India and if Pakistani Army doesn’t know about it, then the media has the right to go ahead and check on to the reality. Their side is open: to the UN mission, to the media, to the general public.

Well this is the first time in the history that any Army had to prove its point to its general masses by conducting such a trip or journey. What are your views about this ? Write it down in the comment section below.

Dhamakedaar Offer! Idea Is Offering Unlimited 4G Data For Just 1 Rupee! Here’s How You Can Apply!
Once Again An iPhone Exploded ! Here’s What Happened To The Student Who Had It In His Pocket!