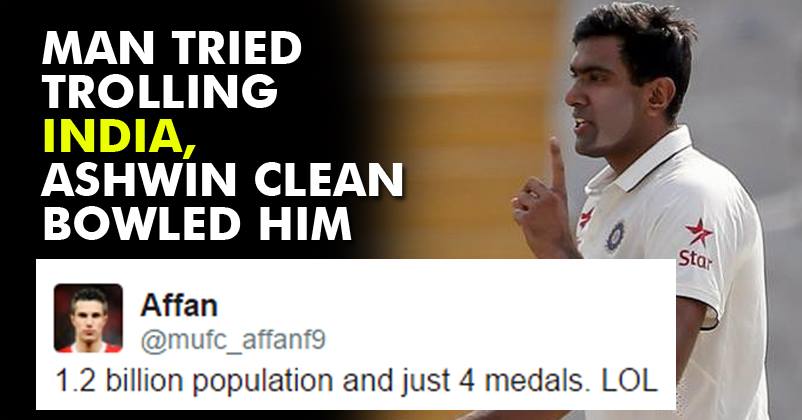 India’s performance in the Rio 2016 Paralympics has been the best performance of the country in Paralympics History. India has bagged four medals so far. Out of the four, India has two gold, one silver and one bronze medals. The two golds are won by Devendra Jhajharia in javelin throw, Mariyappan Thangavelu in men’s high jump, the silver medal earned by Deepa Malik in shot put and one bronze medal by Varun Bhati in high jump. This is also the first time a woman has won a medal for India at the Games. Deepa Malik, who won the silver medal in shot put is the first Indian woman to win the Paralympic medal.

But there are some people out here who are always ready to criticize, people who are judgemental, people who can’t digest your success, people who find it cool to hate on someone. These haters are everywhere. A Pakistan cricket fan tried mocking India’s success at the Rio Paralympics.

After Deepa Malik won the silver medal in the shot put on Monday, Indian spinner Ravichandran Ashwin congratulated her, wrote a very inspiring message on twitter, he wrote:

So these exceptionally talented men and women continue to inspire the nation.Well done #DeepaMalik #legend

This Pakistan cricket fan saw the tweet, couldn’t digest the fact that India has earned 4 medals in the Paralympics. He tried to mock India’s victory, to attract Ashwin’s attention, he tweeted:

Ashwin saw the tweet and he shut down the troll in the most humble way!

ranked as high as no 6 in the population chart, I wish you to go for the second medal.All the best brothers and sisters.

Before you know it, another guy from Pakistan popped up and started making fun of India’s victory and medal tally. He replied to the Ashwin’s tweet:

Ashwin didn’t get angry, he rather asked them to step up! He hoped that our dear neighbor would earn minimum 4 medals in the Olympics. That’s how you shut the haters. Ashwin showed how to deal with all the negativity, hate in the most humble way. The Reason Why Paralympians Are Shaking Their Medals!
Virender Sehwag Slammed All Those Who Think Poverty Causes Terrorism!