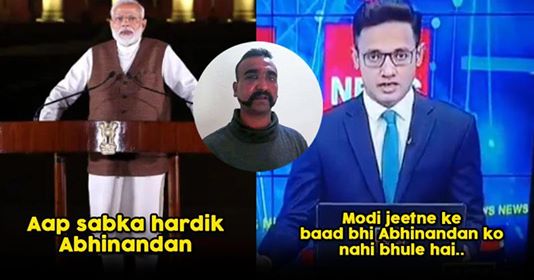 Modi has won the election and will be running for the second time now. After winning marginally Prime Minister Narendra Modi addressed 353 MPs from the alliance at the Central Hall of Parliament on Saturday.

When he used the word Abhinandan, he meant congratulations but the Pakistani TV anchor mistook it with the name of Indian Air Force officer pilot Abhinandan Varthaman, who was held captive in Pakistan post-Balakot air strike.

The clip of the Pakistani anchor has gone viral on Twitter, in which the person says that even after the elections he has not forgotten about the IAF pilot.

If nothing else, look at the context of Modi's speech. Sensationalise karne k liyay bhi aqal chaiye.. 🙆🏻‍♀️pic.twitter.com/pgwcpOucla

It did not take long enough for the Twitter users to pick on this and he got trolled for his mistake!

BJP Hindi is not Bollywood Hindi which Pakistanis understand

Desi media is always on drugs.

Grand as usual !
If I.K. or “IDARE” allow you to set standards, Pakistan will be one of Leading Nations !
Aapka dil se Abhinandan !

I don't remember seeing a more WTF news item recently.
What is wrong with these people!!!! https://t.co/m6Xhz2bMvD

Don't blame guys at @ARYNEWSOFFICIAL most of them know Hindi words through Bollywood films, which brings their Hindi knowledge only this far 🙂 https://t.co/y3qLDI2YpJ

Meet This Handsome Malayali From Kerala, Who Was A Part Of Game Of Thrones
Know More About These Hotties Who Are Going To Be Seen A Lot In ICC World Cup 2019