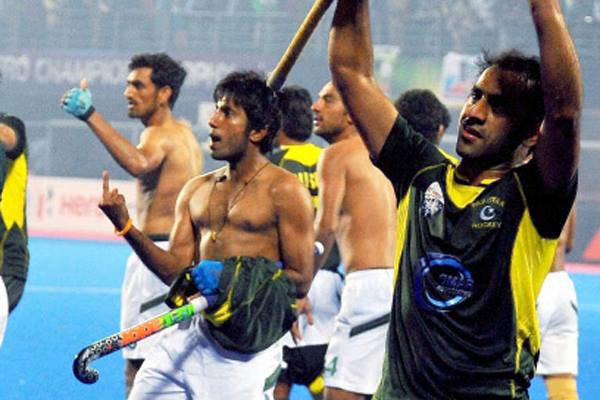 Last night, on 13th December an exciting game of Hockey came to an end with India losing to Pakistan 4-3 in the semi-final of the Champions Trophy at the Kalinga Stadium. But this beautiful and exciting game ended in an ugly manner with Pakistani players showing obscene gestures towards the audience and Indian players.Soon after the game ended, the Pakistani players were seen celebrating in a very wild manner. They firstly removed their shirts, used foul language and made obscene gestures towards the crowd and media.

After this wild behavior of Pakistani players, Pakistan coach Shahnaz Shaikh apologized to the media for his team’s behavior.

Wiert Doyer, the director of the tournament the said that the Apology was accepted by International Hockey Federation (FIH). He added —

The celebration of the Pakistani team contained some behavior that warranted further investigation by me as tournament director. As a result I have spoken to the head coach of the Pakistan team, Mr Shahnaz Sheikh and told him that the behavior Pakistan players went beyond what is acceptable to standards of the FIH

The behavior in question concerned many members of the Pakistan team. It is difficult to find any particular miscreant, and it is possible that the behavior of the players may have been a reaction. Shahnaz Sheikh has apologized and assured me that this behavior will not occur again. Given these matters, I’ve decided that no further action is warranted Pakistani coach,Shahnaz Shaikh felt ashamed by the behaviors of his player and just said sorry to the media. Here is what he said —

I am not a politician I am a sportsperson, but I am sorry for this. They are youngsters and made a mistake in enthusiasm. I guess that’s enough

It doesn’t look good because many families came to watch the match. Their celebration after the win was not appropriate. They deserved to win. Congratulations to them, but the way they celebrated by opening their shirt and making indecent gestures was not right. It sends a wrong message.

Have a look at FIH’s response to the incident — So, what are your views about incident?? Should FIH take some strict action against these type of incidents??
Was this behavior by Pakistani players tolerable??

Continue Reading
You may also like...
Related Topics:Hokcey, India, Pakistan