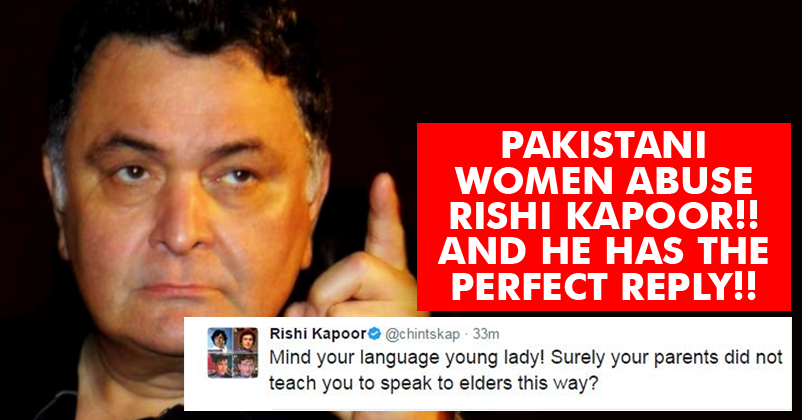 We all know that Pakistan has announced death penalty to former Indian Navy officer Kulbhushan Jadhav under the charges of spying. Rishi Kapoor is definitely not supporting the decision and therefore he voiced his denial on a social media platform.

The veteran actor is getting slammed for voicing his opinion on Twitter. The actor wrote, “Sorry India.Tried to broker peace via actors, films, within sports etc..with Pakistan, but they just want hatred, so be it! Taali do haath se bajti hai!”

Well, within few seconds, the Pakistan users totally ruined his day with numerous hate tweets targeted towards Rishi Kapoor. He was just being honest, but that didn’t go down too well with our friends from another country.

The actor lost his calm and he too gave it back to the haters in equal brevity. Most of the tweets were abusive in nature and it was strangely coming more from women than men.

You can check out all the tweets right here:

When a girl did not use the correct words, Rishi Kapoor showed her the right way

How fucking ignorant is this person? https://t.co/VZvxmsNwSz

Mind your language young lady! Surely your parents did not teach you to speak to elders this way? https://t.co/btm5Kn8fQj

My parents taught me very well sir, but this morality lecture doesnt justify your ignorant stance. Look how other countries treat spies 🙂 https://t.co/OJ9tCmDKqd

I was talking about your language not morality. Perhaps that's the way you address elders there https://t.co/augGKGwTfK

Amidst this, Rishi Kapoor’s trick did work, most of the haters deleted their tweet

These girls abuse and when exposed they make their tweets unavailable. Such is their conviction lol

Lastly, there were few who agreed with him, who believed in peace over war

Why to see only the bad side ?? there are some ppl like u and me in both the side who want peace & iA we will get one day.

Atta girl!This should be the spirit! An eye for an eye will only make the world blind! Build bridges,not walls! https://t.co/TShXRuMxcC

This is not the first time Rishi Kapoor’s Twitter has hit the controversies, it has happened several times in the past too. However, Rishi Kapoor had earlier revealed that he will not entertain hate tweets that are abusive. He will abuse the people back and expose them.

He wrote, “They are the ones who are abusing me and taking advantage of my situation. The way I have stopped entertaining them is that I go to them and teach them a lesson and come back. They are nonsensical people. They are the ones who are following me. Only if they are following me, can I go to them and send them a direct message. You can’t bloody follow me and abuse me and you think I will keep quiet. I won’t leave these guys. You will lose being a friend of mine. These people think they can get away with anything. They think they are smart a**es.”

Do you guys agree with Rishi Kapoor on this? Do let us know in the comments section.

News Anchor Was “Day Dreaming” & Suddenly The Cameras Turned To Her! Her Reaction Is Priceless!
Ranveer Wants To Be Arjun Kapoor’s “Half Girlfriend”! This Twitter Chat Is Too Romantic To Miss