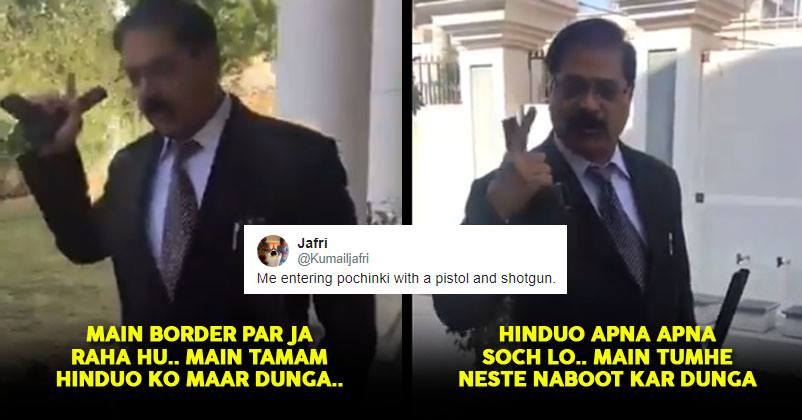 Recently the military and political tension between India and Pakistan has escalated to a great extent. Ever since the Pulwama tragedy, where more than forty of our CRPF Jawans lost their lives, the situation went on deteriorating.

Even after this incident, a video went viral where Pakistan based militant group Jaish-e-Mohammed claimed responsibility. A car full of explosives rammed into CRPF convoy completely destroying everything.

Both the nations are dealing with the worst kind of situation, where people from both the countries have been campaigning for peace and encouraging #SayNoToWar. After Pakistan released Wing Commander Abhinandan Varthaman, the situation somewhat deescalated.

Now, amidst all these a Twitter user Azam Jamil posted a video online where we can see a Pakistani man with two guns, dressed in a suit going out to the border to fight with Indian Army. Here have a look.

The video posted by Azim Jamil got the perfect caption as well. This video left everyone in splits and you surely can’t miss these hilarious replies.

@republic Arnab your friend from Pakistan is on the way! Rush to border and face him and save India! Please

1.1K retweets. This moron has finally got his moment in the sun. No matter how ridiculous and laughable, it is fame earned.

Is he one of those war mongering journalists who was asked to " go fight on the border " ? 🤔

I was miserable since morning with the damn flu and fever but this made me laugh so hard! 😂😂😂 Awesome 👏👏

😂 Look how many views he got

Fair warning, if we capture him, we're keeping him 😂

going to the border with a .30 caliber Chinese pistol and a 12 gauge double barrel rifle ? Dude I don't think you will last too long.

Oh God….got stitches in my tummy….so needed that.I dunno if video or your caption was funnier but thanks 😂😂👍👍 pic.twitter.com/cArbRLy96w

Hello @adgpi careful. This joker is coming to our boarder (of course in suit 😜). Bhago bhago . He is going to kill all of us single handedly. I don't know till this time these type of people also will be there. Showing off in front of his wives it seems 🙄😝🤣🤣🤣🤣

So, what is your message for our enthusiastic neighbor?

Pakistanis Demanded Nobel Peace Prize For Imran Khan. This Is How Pak PM Reacted
Trevor Noah Responds To The Criticism He Received For His Poor Joke On India-Pak Tension