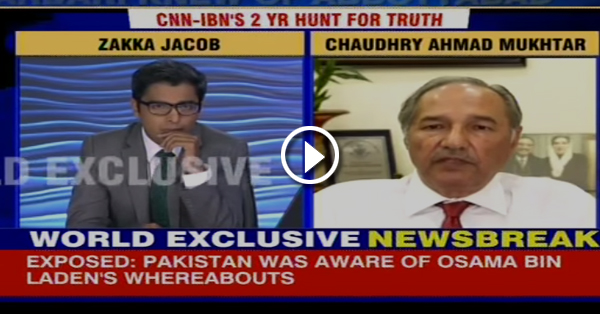 Thanks to this new video interview conducted by CNN IBN, the Mask which Pakistan have put on its real face has now been Uncovered. This video is about Worlds Most Wanted Terrorist and Al-Quaeda chief Osama Bin Laden and the way Pakistan had helped him to take refuge in the Capital City of Pakistan itself for years. When the entire world was searching for this terrorist across the nations for the very popular 9/11 Terror Attacks, he was in peace in his own terrors own country PAKISTAN, relaxed under the refuge of its own government and leaders, who made all the efforts to hide him from the world.
Time and again India and other nations with sufficient proofs have accused Pakistan to having been involved in Terror activities or helping those who are involved in such activities. But right from the day 1, Pakistan had been in the denial mode and never agreed to any of such allegations made.
But this time CNN IBN had come up with an Interview with the then Defense Minister Chaudhry Ahmad Mukhtar, who reveals how Pakistan had deliberately hid Osama from the world and how the Govt. of Pakistan under Zadari including top officials and Army Chief had information about Osama and how they Hid it from everyone.
Watch the entire video here:

I wonder what Pakistan has to say on this now? Would they call even this as India’s plan to defame Pakistan? The WORLD Waits For Pakistan’s Answer Now!!

Boy Found Out That He Is A Girl When He Turned 16!! Shocking
WhatsApp Group Admin Arrested For Objectionable Content