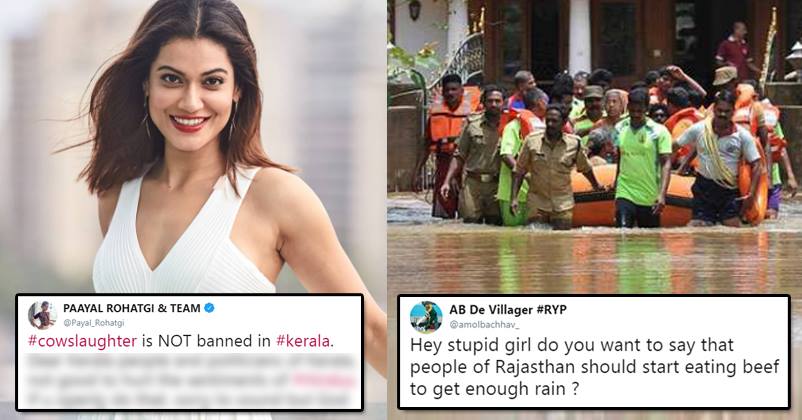 Kerala has been experiencing the worst flood situation ever and considering the devastation that has been caused, it will take quite a long time for the God’s own country to bounce back. More than 300 citizens of the state are not amidst us while more than 3 lakhs have left their homes so that they can at least save their lives. 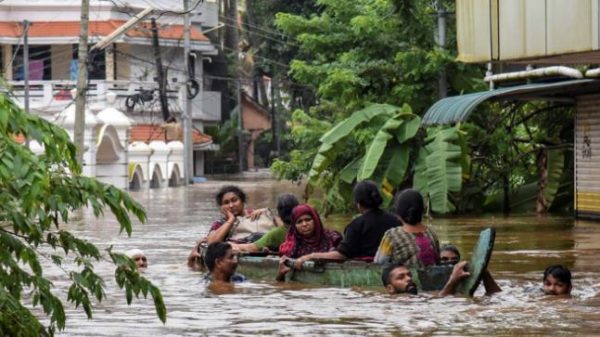 While there are many who are holding the mankind responsible for such disaster and saying that increasing deforestation, population and pollution are the reasons  because of which such a disaster has taken place, some are saying that Kerala is destroyed so much because cows are slaughtered there and their meat is eaten in meals.

The model-actress Payal Rohatgi also took to Twitter and asked people and politicians of Kerala not to hurt the sentiments of Hindus as cow slaughter is not banned in Kerala and it may have made the God angry. She asked them not to hurt someone’s religious faith like this. 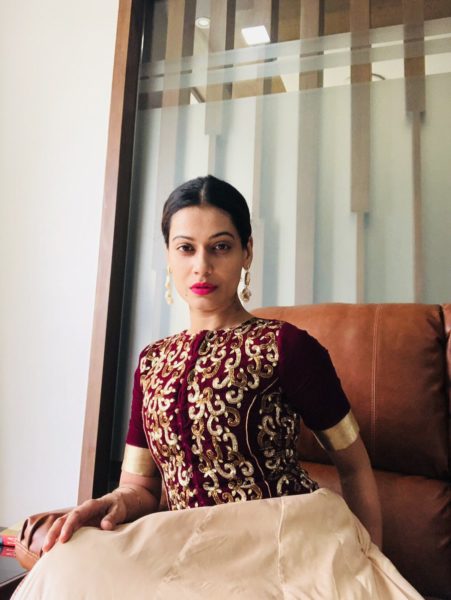 She tweeted, “#cowslaughter is NOT banned in #kerala. Dear Kerala people and politicians of Kerala, not good to hurt the sentiments of #Hindus. If u openly do that, sorry to sound but God also openly does it.. God is one ☝️ but u can’t hurt religious faith like this🙏”

#cowslaughter is NOT banned in #kerala. Dear Kerala people and politicians of Kerala, not good to hurt the sentiments of #Hindus. If u openly do that, sorry to sound but God also openly does it.. God is one ☝️ but u can’t hurt religious faith like this🙏 pic.twitter.com/eqBwM7F15G

Twitter couldn’t digest her logic and trolled her mercilessly for bringing religion in between the natural calamity. They also mocked her for using her photo while talking about cows and asked as to why Goa and North East don’t experience floods considering the fact that beef is eaten there as well.

SIde effect of drugs.. those who claims Natural calamity is because of Beef. WHat next, Goa, Manipur, Assam ? How long this stupidity will be appreciated by BJP

Hey stupid girl do you want to say that people of Rajasthan should start eating beef to get enough rain ?

What about other states and countries. What about the people exporting Beef. Don't lynch people let the flood come to those who eat beef

Just curious here.
Is the picture used to depict cows in anyway? 🤔

What logic Madam! Pl explain then why natural calamities happened in J&K,Mumbai, Uttrakhand,Gujarat ? Beef is banned in these states right..

There are more ways to make yourself relevant. Seek your two min fame with your focus on your work! This is cheap publicity

Actually ..you need a break seriously..itna dimag par zor daloge is umr me to kya hoga..

I understand you're not getting any work… So this is the last resort to spread hate and get recruited by BJP n RSS and become a certified bhakt.

What is your opinion in this regard? Do you agree with Payal Rohatgi?