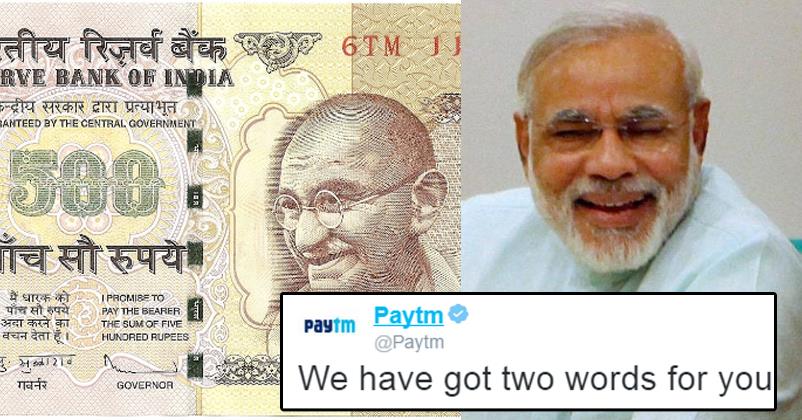 In a step to fight corruption and black money, Central Government announced demonetization of Rs 500 and Rs 1000 notes with immediate effect i.e. from today midnight. Yes, these notes are considered as “Invalid” from tomorrow and this is definitely an effective step against corruption, fake currency and black money.

He also announced that new notes of Rs 2000 and Rs 500 will be introduced. Here’s how they are going to look.. People who are having these old notes can exchange them in banks from 10th of November to 31st of December, and those who can’t exchange in that period can submit an application to the RBI till the 31st of March 2017. Moreover, notes can be exchanged by submitting voter ID card, PAN card or Aadhar card.

This has suddenly caused a lot of chaos! People don’t know what to do as banks and ATMs are closed tomorrow and there is no way to carry out transactions too. Twitter is full of reactions for this but the best one is that of PayTM. Yes, want to know how the company reacted? Here’s the tweet…

We have got two words for you: Paytm Karo.

This is a superb reply, isn’t it? PayTM as we all know is an electronic wallet, for shopping, bill payments, transactions and much more. Now since cash transactions can’t be done tomorrow, PayTM has a good chance of doing business, LOL! Everyone would prefer depositing their money through credit cards, debit cards or NetBanking and then use it in case of emergencies!

Haha. That was bang on target!

PayTM karo literally translates to "Do PayTM" i.e. Use Paytm

This was a hilarious response, isn’t it? Do share your views in our comments section below!

New Rules For ATM’s & Transactions! Bad News For All Businessmen…
These Hilarious RVCJ Memes On The Ban Of 500-1000 Notes Will Make You Go ROFL!