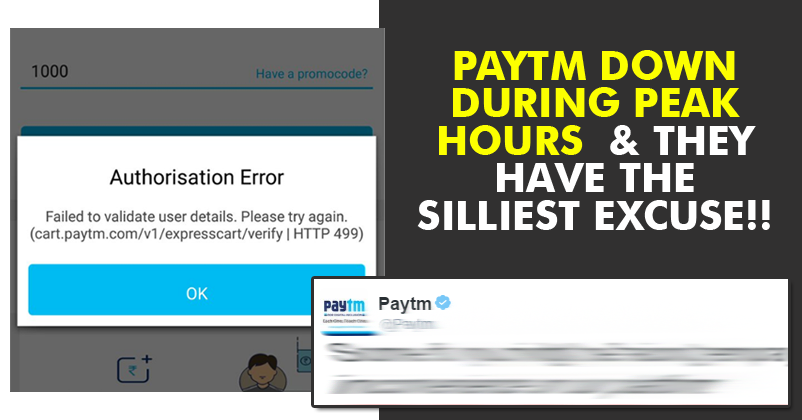 Needless to say, the demonetization step taken by Modi govt. has created a lot of problems for common people and the worst thing about it is the cash crunch due to which a state of chaos and restlessness has prevailed all over the country. Well, there is no denying the fact that in such a condition, options like Paytm seem to be of a great help and indisputably, the business of such e-commerce firms has increased by leaps and bounds after note ban.

A large number of individuals started taking resort to Paytm which availed itself of demonetization and grabbed the opportunity to boost its business. What’s more, people also found it quite useful, as they didn’t need to carry cash with them and hence, it shortly had a positive feedback.

However, recently Paytm was down due to some technical issue but they are making silly and lame excuses for the same. This is what Paytm tweeted, “Some of you might be facing temporary inconvenience on our platform. We’re currently updating our systems for higher capacity. Back shortly.”

Some of you might be facing temporary inconvenience on our platform. We're currently updating our systems for higher capacity. Back shortly.

We all know that no upgrade is ideally done in peak hours, as they generally happen after midnight or during non-peak hours so that users don’t have to face any inconvenience. As we told you that at the present time, many users rely on Paytm to make transactions, they are facing the hell of lot difficulties in payments. What’s more pathetic is that few people are out in a hotel or a shop without their wallet and they are stuck there just for paying bills. Isn’t it ridiculous? Paytm is down since 6 PM which is definitely peak timing and according to them, they are doing upgrades on peak hours, which is not at all expected or acceptable from one of the leading websites. Everyone in the technical industry is well aware of the fact that upgrades are not meant to be done in peak hours so Paytm could have given a better and more genuine excuse for website down rather than thinking users a fool to believe the crap! Even RVCJ does all the upgrades between 1 AM-6 AM and there’s no chance that Paytm doesn’t know this thing!

Paytm users turned furious due to website down and took to Twitter to express their rage over the matter!

Upgrading happens at midnight and on weekends. Not in middle of the day when people are making transactions

Such activities are best planned during late night hours so that minimum inconvenience is caused.

People had problems in transactions when out without cash!

I am also not able to pay in restaurant. Have u gone out of mind??

I am not being able to pay for my hospital bill because of the outage. Have no cash. When will your system be back online?! pic.twitter.com/TIU5zCe7V3

I am not being able to pay for my cab because of the outage. Have no cash. When will your system be back online?! @Paytmcare

Users also asked for ETA or a deadline which is actually necessary in such cases:

. @Paytm A deadline would have been great because many of us are dependent on PayTM for digital transactions.

why don't you say your technology stack sucks and it crashed 😣😣😣😣

maybe you should do this at 2AM.. not at 8PM… This Breaks customer trust !!

What kind of company you people are? should not you notify your customer for such kind of change. Suddenly it shows server error. pic.twitter.com/IYkkhVVrrF

What do you have to say with regard to this? Have you also faced troubles in making transactions? Let us know your opinion in the comments section below.

RaGa Says PM Modi’s “Balloon Will Burst” If He Reveals “Personal Info”! Twitter Burst Into Laughter
Mumbai Man Tries To Sell His ‘Exclusive Phone’ On Facebook & His Ad Is Too Funny To Ignore