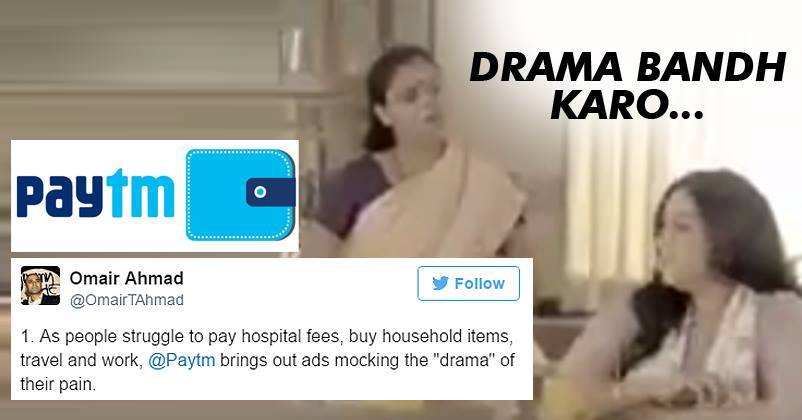 After the demonetization of Rs. 500 and Rs. 1,000 notes, the E-wallet firms are advertising aggressively to attract customers for making monetary transactions, digitally. These e-wallet firms are using every platform whether it is print media, electronic media or social media to reach as many prospective customers as possible.

One of the e-wallet firms that seems to be the most aggressive at present is PayTM, undoubtedly. It also created a little bit of controversy when it came up with an advertisement featuring PM Narendra Modi after the big decision of demonetization. To which the founder and CEO of PayTM responded:

PayTM has once again created a controversy and this time it is because of a line “Drama Bandh Karo” in its new ad. This ad was posted by PayTM yesterday on social media:

Excellent ad for #PayTM unfortunately housed down by the pretentious mob representing the lady whining in the video. pic.twitter.com/Wxbx6tJMB6

A housewife is seen criticizing the government for the note ban as she needs to pay the salary of her maid, to which her maid replies, “Drama Bandh Karo, PayTM Karo”.

This dialogue has not gone well with the public as there are long lines of people in banks and ATMs for exchanging and withdrawing notes.

What are the alternatives to Paytm? I'm really getting sick of their daily gloating while everyone struggles.Want to not use it.

Dear @vijayshekhar I am uninstalling @Paytm for mocking people facing hardship due to demonetization through your disgusting ads #StopPayTM pic.twitter.com/JD8kXsrBMr

1. As people struggle to pay hospital fees, buy household items, travel and work, @Paytm brings out ads mocking the "drama" of their pain.

The trolling of PayTM made them rethink and the upgraded ad was released which didn’t have the line “Drama Bandh Karo”:

With our strong belief in financial inclusion for every Indian, here is our upgraded ad. pic.twitter.com/DiUbNuERGK

However, the damage is already done and it has now taken a political turn. Some Twitter users are accusing political people and press for making PayTM modify their ad.

So AAPis forced @vijayshekhar to pull out this @Paytm ad and toe the party line? And they talk of 'crony capitalism'! https://t.co/rUId5KEZLs

It’s not upgraded but toned-down version:

It’s as downgraded as you are!

Dear @vijayshekhar it's not upgraded,its downgraded ! In fact it has downgraded u as person !
Mettle is tested it in tough condition!

This is the original ad, while #adarshliberals #presitutes forced PayTm to change the ' Drama' to ' hamari chinta' @Paytm @vijayshekhar pic.twitter.com/p07fjbkyeP

Did you remove "Drama bandh karo" because "drama" is associated with @ArvindKejriwal? Hurt his feelings?#DramaQueens

Downgraded because liberal louts having fake concern for maids, cooks, carpenters didn't like it. @vijayshekhar

Uninstalling the app for the diplomatic new version:

drama word is apt since you removed that word to suit your political identity uninstalling your app. Drama math karo @Paytm

Do let us know what is your opinion in this regard in the comments section below.

Great News! Now You Can Get Notes Of Rs 50 & Rs 20 From ATMs Of This BANK
This Decision Taken By Modi Government Will Definitely Help To Control Crowd Outside Banks & ATMs!