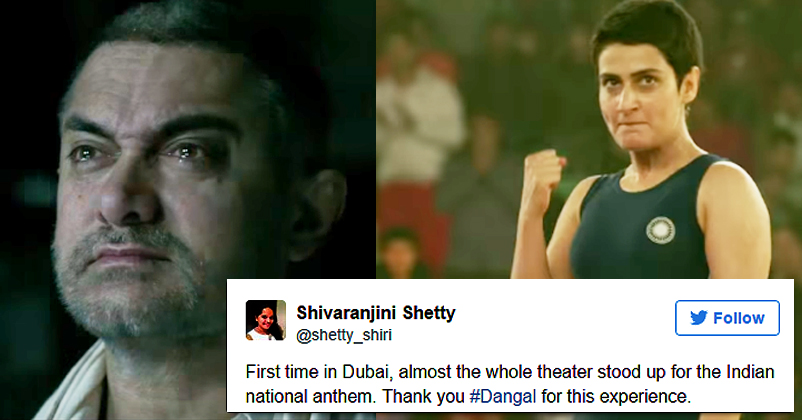 Aamir Khan’s latest movie Dangal has hit the theaters and it has tasted a huge success. The movie is certainly one of the finest gems of our Bollywood industry. It talks about everything. From a father’s struggle to make his kids stand independently in their life to showing the kind of love that we all should have for our country India, it covered all aspect. However, while watching the movie Dangal, there came a moment in audience’s life when they were as clueless as the opponents of Geeta Phogat. As per directed by the Supreme Court of India, the movie started off with the National Anthem of India. Some people stood up out of respect while some out of the fear of NOT ABIDING BY THE LAW. However, things got a bit more trickier when the national anthem was again played at the end of the movie when Geeta Phogat won the gold medal for India in CWG 2010. To this, people were in real trouble as many of them were confused about whether to stand up or not. In my personal experience, some did, while some didn’t.

Here are some twitter reactions to this confused scenario that they faced in the hall.

The most defining moment of #Dangal is when the people in the theatre stand up for the national anthem at the end naturally out of respect.

2. It just comes at the right moment.

Lessons from #dangal – Ppl dont need a court ruling to make them stand up for National Anthem….it just comes from inside & at right moment

3. Was that deliberately done ?

4. This is definitely a proud moment.

First time in Dubai, almost the whole theater stood up for the Indian national anthem. Thank you #Dangal for this experience.

Watched Dangal Salute you @aamir_khan! Everyone in the theater stood during the NationalAnthem in the movie!I give it 10/10 rating

6. A lesson well taught and learned.

That's how you make people stand for the National Anthem and not by forcing it. Lesson well taught. #DangalDay #Dangal@aamir_khan

Playing national anthem in the climax was a very smart move of taking much deserved standing ovation. #Dangal

I had to stand up for national anthem in #Dangal and it was not out of respect, but fear.

Many people stood for national anthem during 'Dangal' because when people in their front row stood, they couldn't watch the movie.

Well, a lot of people have mixed reactions to it. What are your views about it. Do let us know in the comment section below.