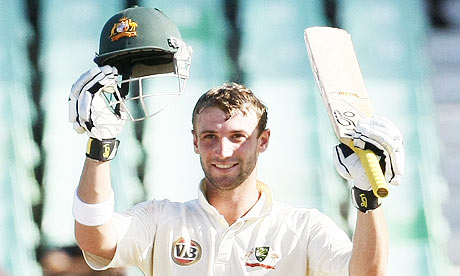 When we watch or play cricket,we think the batting as the most easiest task after umpiring.Even in this time of helmets,there are some cases of ‘Broken Noses’, ‘Damaged Eyes’, ‘Teeth Break’ etc but there was no cases of life-debilitating up to this point.But the brain-injury of Australian batsman Phil Hughes proved all the cricket-world wrong once again in terms of safety while doing the safest task on cricket field aka batting.The tragic incident took place when Phil got hit by a bouncer from Sean Abbott in the match between New South Wales and South Australia.He missed the ball and as a result he got hit by that bouncer in the head and fall flat on the Sydney Cricket Ground pitch. He then immediately was transferred to Vincent’s Hospital.Cricket Australia team doctor Peter Brukner stated his condition as “critical” after a surgery that was performed at the hospital.There were also false tweets about his condition. He made his test debut against South Africa in 2009 and has played 26 test matches till now.He became the youngest batsman to post two centuries in a single Test in his 2nd test. Do you guys still think batting as the easiest job on Cricket field?