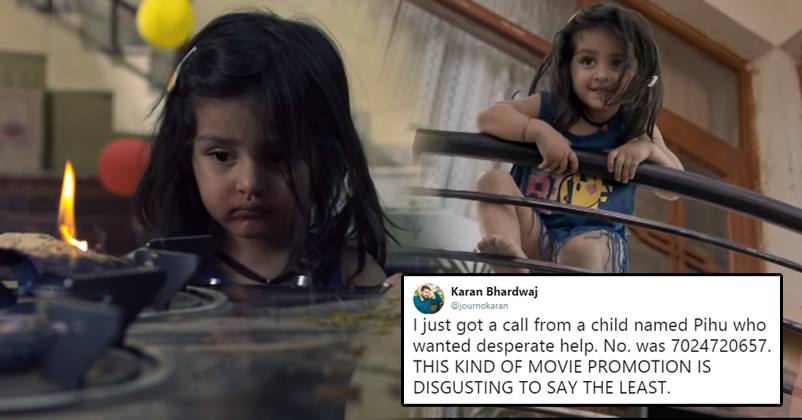 The trailer of upcoming movie “Pihu” has been liked by several people while some were left a little disturbed. Talking about the trailer, it shows a 2 years old girl whose mother is in a non-responsive state and lying on the bed while the little girl is doing some risky things such as cooking on gas, getting inside refrigerator or leaning on balcony.

The flick is said to be based on a true story and the makers are leaving no stone unturned in promoting it but one of their strategy has backfired.

Some people got a call from an unknown number and heard a child crying on the other side of the line. The phone got disconnected and after some time, they received a link to “help the child” but when they clicked on the link, what they got to see was nothing else but the trailer of “Pihu”. 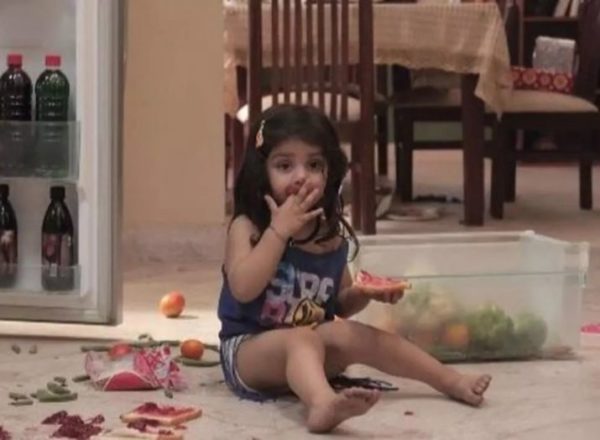 It shocked people as to how the makers can use such an absurd strategy for promoting their movie that can leave people disturbed and traumatized.

Social media users slammed the makers mercilessly for this poor marketing strategy. Here are some reactions:

Got a call from an anonymous number. A baby wailed about her mother and dad, and hung up. Disturbed, I tried calling back in vain. Got a message with a link to help the child. A link, as it turns out, of #Pihu's trailer. A horrible idea, a disgusting invasion of privacy.

Jeez, the #Pihu trailer is nerve-wracking. Such a simple yet emotionally-investable storyline. Making prank phone calls about a child in danger to promote the #movie, however, is a dumb & insensitive marketing campaign. It's like punching people in the face to sell painkillers.

I’m not sure how cool is this promotional gimmick #Pihu pic.twitter.com/la85cofWW2

Seriously pathetic. Whoever thought this would be a good marketing strategy?! Someone like me would go into actual Panic mode hearing a kid in distress.

I loved the trailer of Pihu, but like calling people up from an unknown number as a part of a movie promotional strategy is fucking annoying. Especially when the phone call is of a baby crying for her parents. Movie marketing has reached absurd levels.

Did I just get a call from a hysterical child called Pihu asking for help ???? And this is a film promotion? The no is 7024820657 totally disgusting. I am so traumatised

What sort of marketing strategy involves traumatizing phone calls from a wailing 2 year old? My parents woke up to it and lost their mind.
Idiots. #Pihu

@sakshijoshii @vinodkapri What the hell is wrong with you?? Stop this horrible promotion idea!

Sickening to the core . They have committed an act against the laws of the country .

The trailer is really disturbing. This is a weird way to promote a film. @RonnieScrewvala , do you know about this kind of publicity for the film?

I just got a call from a child named Pihu who wanted desperate help. No. was 7024720657. THIS KIND OF MOVIE PROMOTION IS DISGUSTING TO SAY THE LEAST.

Piss-poor marketing strategy though. Not sure who they think is going to be attracted to see a movie with this theme, more so after the trailers and the tasteless phone calls/SMS #Pihu

What kind of nutcases think it's okay to do this. Next they'll activate fire alarms and play the trailer in the designatedl assembly area where ppl evacuate to. Dolts.

This is pathetic..How the hell one can not see how traumatising that call could be.. Worst #PROMOTION by #Pihu team https://t.co/WtIwirgmlR

However, the producer Ronnie Screwwala seems to be undisturbed with the criticism and says that the marketing team wanted to try something different and it may have left some people unhappy but it doesn’t mean that they will stop looking for different options.

What do you have to say about this marketing gimmick? Let us know your views.

Disha Patani Spotted With A Mystery Man Outside A Salon. See Their Pics
Great News For Sunil Grover’s Fans; He Is All Set To Make A Comeback On TV With A New Comedy Show