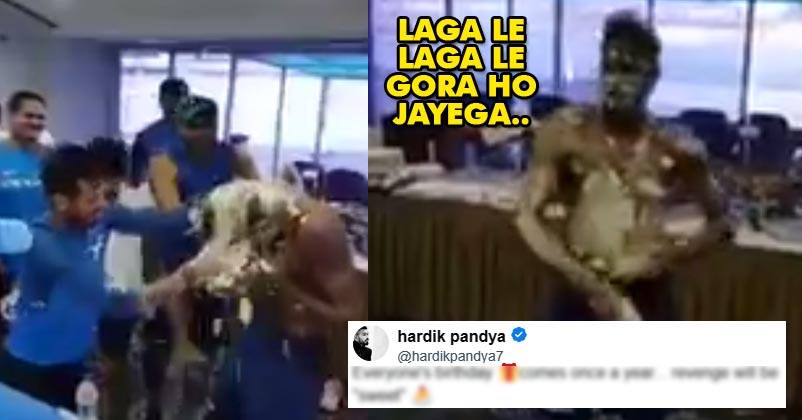 Smashing cake over someone’s face & body on birthdays has become a very common trend these days and just can’t avoid it. Especially if it’s a boys groups, such things are obvious. Same thing goes with our beloved Indian team too.

We have seen how the team has celebrated Dhoni, Kohli and other players’ birthdays with total zest. On 11th October, Hardik Pandya turned 24 & the whole team celebrated his birthday in Guwhati.

Well, he was the latest victim of this cake-smashing and no matter how hard he tried, he couldn’t escape it. His face and body was all covered in cake & Pandya had no option but to accept this attack.

One person who was most active in this attack was Yuzvendra Chahal; Lol, he even asked Pandya to rub it on his whole body so that he becomes “Gora”. Yes, he literally said, “Laga le, gora ho jayega”.

After this attack, Pandya seems to be in a revenge mode, although a sweet one. He uploaded the video on Twitter to let others know how his mates celebrated his birthday. Check it out;

What a caption! Birthday revenges are indeed sweeter.

Let’s see how Pandya sweetly takes revenge from each and everyone, haha!

Continue Reading
You may also like...
Related Topics:BIRTHDAY, Hardik pandya