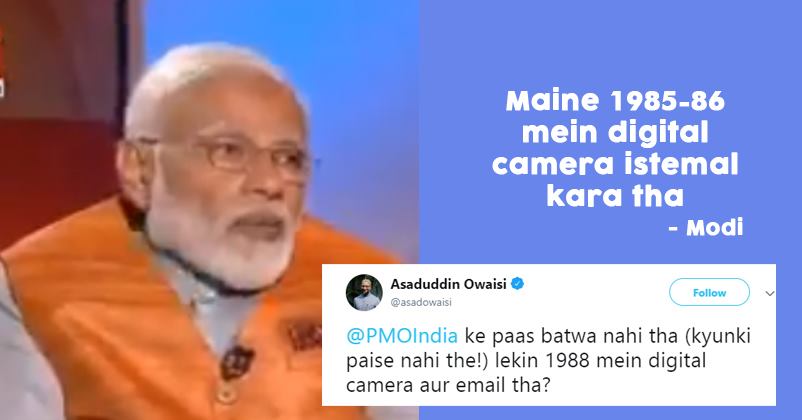 Prime Minister Narendra Modi is again standing on the receiving end of the trollers after one of his recent interviews. After leaving people confused with his cloud theory on Balakot Airstrikes, he took one step ahead and made another claim in the interview which people are calling ‘scripted‘.

In an interview given to News Nation, PM Modi claimed that he used to have a digital camera in 1987-88 when not many people owned one and he used email service in 1988. He said that he clicked a colored photo of BJP veteran leader LK Advani.

Modi is a pathological liar. pic.twitter.com/cCPEUigpNV

The moment this video surfaced on the internet people started slamming and trolling PM Modi and shared the facts related to a digital camera and electronic mail (email).

Even in the developed West (US, Canada) it would have been highly unusual for an average person to be sending an email as early as 1988. My first email 1996. But we know Modi is not your average person… 😅

All of this would be really funny if it weren’t so embarrassing. A PM who’ll literally say ANYTHING that comes to his mind can’t possibly be trusted with our national security”

All of this would be really funny if it weren’t so embarrassing. A PM who’ll literally say ANYTHING that comes to his mind can’t possibly be trusted with our national security https://t.co/pmoGNQQtHi

Any guesses as to what @narendramodi email id was in 1988?
[email protected] is my guess https://t.co/iVnSHtGsIn

Modi Ji has now claimed to use digital camera & email services even before its advent in India.After failing to deliver good governance,Modi ji has also failed with his research & is trying hard to bluff the people.

Narendra Modi emailing his first packet in 1988 via ARPANET on a cloudless day. pic.twitter.com/gUhEWHKsOn

Let’s not blame Modi, he sees worshipful panna pramukhs gaze at him. The one thing he loves the camera is on him. The poor man gets carried away

The first commercial production digital camera went on sale in 1990. In 1987, Modi had a digital camera. Surely must have been this prototype. pic.twitter.com/H7b8FMclha

The official Twitter pages of Bharatiya Janata Party (BJP) and BJP Gujarat shared Prime Minister’s interview video but later deleted the tweets. Guess they forgot, what goes on the Internet can never be forgotten or deleted as screen-shots and clips remain forever.