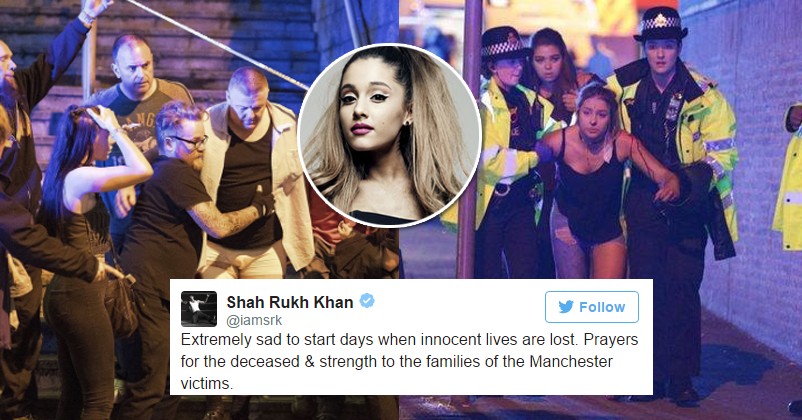 We attend music concerts to enjoy some awesome moments and have a great time. The same was the case with 20,000 people who went to attend the concert of popular American singer Ariana Grande; however, for 19 of them, it became their last music concert.

Yes, 19 were killed and 50 were left injured in the suspected terrorist attack which took place at 10:30 pm on Monday night during the concert which took place in Manchester. The concert, under Grande’s “The Dangerous Woman Tour”, was about to finish when the bomb exploded. All of a sudden, there was a situation of chaos and panic; everybody was screaming and running out of Manchester Arena. Ambulances and bomb disposal squads reached the spot immediately. The reason of the blast is unknown but the British PM Theresa May has said that it will be considered as a terror attack till complete details are found out.

The team of singer Ariana Grande confirmed that the singer is safe; she also expressed her sorrow on Twitter and wrote, “broken. from the bottom of my heart, I am so so sorry. I don’t have words.”

broken.
from the bottom of my heart, i am so so sorry. i don't have words.

Various celebrities including PM Modi have mourned over the shocking incident on Twitter:

Pained by the attack in Manchester. We strongly condemn it. Our thoughts are with the families of the deceased & prayers with the injured.

Extremely sad to start days when innocent lives are lost. Prayers for the deceased & strength to the families of the Manchester victims.

My thoughts and prayers are with @ArianaGrande and everyone who was hurt at the concert in Manchester.. what is happening to the world..

So upset!!How can this happen every few months?? Feel soo helpless! Prayers for the victims and their families! #manchesterterrorattack

Sad & Shocking news from Manchester… Prayers & thoughts with the victims of this terrible attack.

Just woke up to news about the #Manchester attack. Absolutely heart breaking. This is an attack on humanity

Children. Children were targeted. I have no words. Watching the news all morning. My heart goes out to everyone in Manchester. Love to those

Deeply saddened to hear about the Manchester attack . This brutality & hatred is so so horrid & frustrating.Prayers are with the victims🙏🏼

Celebrities from the cricket world:

Deeply saddened by #Manchester attack. Thoughts & prayers with everyone affected. Condolences to their families.

Extremely sad to hear about #manchesterblast. My heart goes out to friends and families of the victims! Prayers 🙏👏

My heart hurts for my sister, Ariana & every family affected by this tragic event in the U.K. Innocent lives lost. I'm so sorry to hear this

Our prayers and strengh to the victims and their families involved in this tragedy in Manchester. Stay strong. @ArianaGrande 🙏🏾

Praying for everyone at @ArianaGrande's show

My thoughts and prayers go out to everyone affected in Manchester.

Ranveer Singh Has Gone Too Far This Time & His Latest Outfit Will Make You Go WTF!
These Famous People Have Weird Eating Habits & It Will Leave You Stunned! Want To Know?