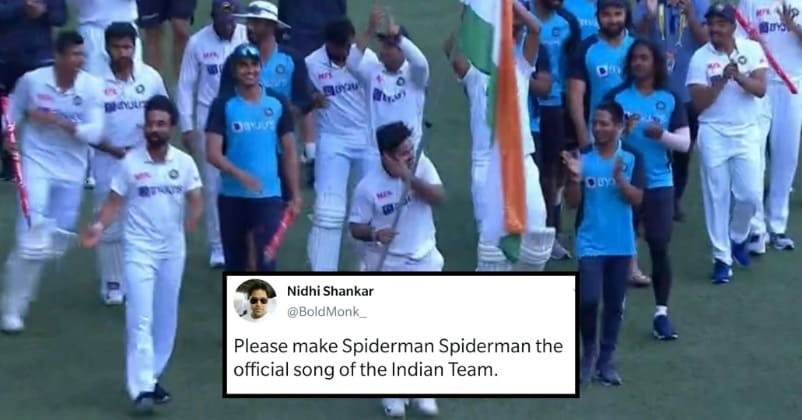 The Indian cricket team has certainly made history by winning the four match test series by 2-1 and more importantly by defeating the Australian team at Gabba, Brisbane, where they have been invincible for the last 33 years.

What makes this victory more special is the fact that in the last test match, India was playing without its best test cricket batsman Virat Kohli and without some other important players such as Mohammad Shami, Jasprit Bumrah, Ravindra Jadeja and Ravichandran Ashwin. The Indian team comprised of mostly less experienced players led by a dynamic skipper Ajinkya Rahane who guided the team in the most prolific way. 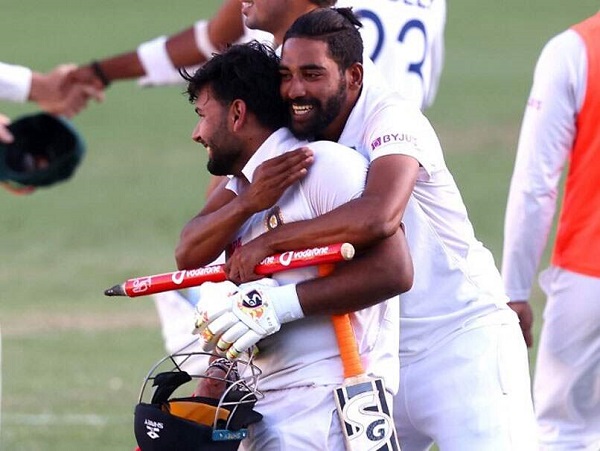 Not just the Australian team but many former Aussie cricketers were convinced of their win in the Gabba test because they haven’t lost a test match over there in the last 33 years but with their grit, courage, patience and determination, this Indian team not only broke the record but also gave a perfect reply to their critics. This Indian team proved it that the more they will be pushed towards the wall, the more powerful their bounce back will be.

The Indian youngsters didn’t miss the chance of using the opportunity whenever they got it, whether its Mohammed Siraj who ripped apart the Australian batting by taking his first five wicket haul or Shardul Thakur who not only performed well with the bowl but with the bat as well. T. Natarajan is certainly the find of the tour as in the recent past, he is the only cricketer to make debut in all the three formats. Washington Sundar also rose to the moment and not only took wickets but also made runs along with Shardul Thakur to help India post a decent total in the first innings. How we can forget to talk about Shubman Gill who fulfilled the responsibility of opening the batting in a pretty good manner and played a brilliant innings of 91 runs in the second innings and Rishabh Pant who played a beautiful innings of 89 runs and remained unbeaten till the end in the second innings. 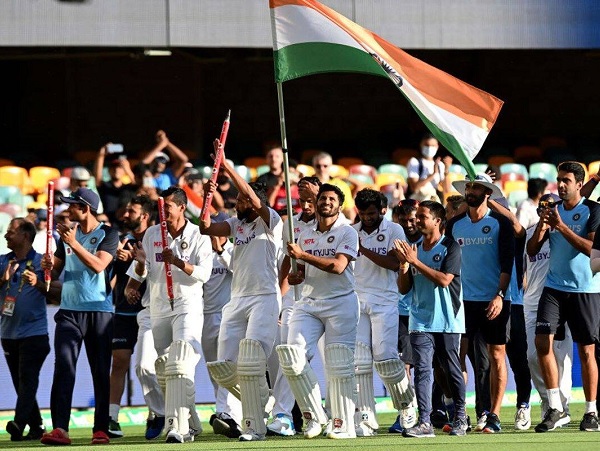 The seniors of the team – Ajinkya Rahane, Cheteshwar Pujara and Rohit Sharma also played important roles in the win; in simple words, every player of the Indian team ensured that he contributed well in the Indian win.

This was certainly an incredible victory and from the Indian Prime Minister Narendra Modi to cricketers and former cricketers, all have expressed their happiness on social media. Check out the tweets:

We are all overjoyed at the success of the Indian Cricket Team in Australia. Their remarkable energy and passion was visible throughout. So was their stellar intent, remarkable grit and determination. Congratulations to the team! Best wishes for your future endeavours.

This is how cricketers reacted:

WHAT A WIN!!! Yessssss. To everyone who doubted us after Adelaide, stand up and take notice. Exemplary performance but the grit and determination was the standout for us the whole way. Well done to all the boys and the management. Enjoy this historic feat lads. Cheers 👏🏼🇮🇳 @BCCI pic.twitter.com/CgWElgOOO1

Khushi ke maare pagal. This is the new India. Ghar mein ghuskar maarta hai.
From what happened in Adelaide to this, these young guys have given us a joy of a lifetime. There have been World Cup wins but this is special.
And yes,there is a reason Pant is extra special . pic.twitter.com/3CAQIkAuwq

India had many players injured, but what has been injured more has been the Australian arrogance & pride.
The test series has been like a movie with every member of Indian Team being a hero & some of them Superheroes.
Spiderman Spiderman tune churaya dil ka chain @RishabhPant17 pic.twitter.com/5psVFjp5Ww

What a Test match! The depth of Indian Cricket is scary. @RishabhPant17 , sweet number 17. Well played young man. #testcricket at its very best

Just a remarkable win…To go to Australia and win a test series in this way ..will be remembered in the history of indian cricket forever ..Bcci announces a 5 cr bonus for the team ..The value of this win is beyond any number ..well done to every member of the touring party..

Wow .. That has to go down as one of the greatest if not the greatest Test victory of all time !! Egg on my face over here in the UK .. but I love to see character & skill .. India have it in abundance .. btw @RealShubmanGill & @RishabhPant17 are future superstars ! #AUSvIND

Great..Great Job India..!! Winning the series after the dismal 36 is simply out of this world..Congrats @ajinkyarahane88 for breaking the jinx of Gabba…Super..Super team effort..Hail India..!!

India thoroughly deserved to win this series, against all odds they stood tall. Australia has some serious thinking to do, had the advantage of home series, fitness and the toss across the series! #AUSvIND

No matter what happens, we shall always play like the team called INDIA! 🇮🇳
You don't get to see such performances everyday. Take a bow champs!#AUSvIND pic.twitter.com/eiBDsgt04S

Another great milestone by my brother @RishabhPant17 achieving 1000 Test Runs at Gabba, what a beautiful sight it has been watching you play today for our country, keep going!👏 #AUSvIND ❤️❤️👌✅☝️@BCCI pic.twitter.com/2OVbCKvJlH

Many congratulations Team India for the fabulous show of character and skill. A wonderful test series with the perfect result. Hopefully the end of discussion of 4 day tests for a while. #INDvsAUS

Okay then….let’s say this one more time. Rishabh Pant should be playing for India in all three formats too. He’s reminded us that let’s not lose patience with him. How blooody good has he been….!!! A game-changer. #AusvInd

@ajinkyarahane88 led the side brilliantly, giving a lot of confidence to youngsters and Pujara exhibited his steely resolve once again. Can’t forget the young bowling unit. Fantastic team effort💪💪 #AUSvsIND

EVERY SESSION WE DISCOVERED A NEW HERO.
Every time we got hit, we stayed put & stood taller. We pushed boundaries of belief to play fearless but not careless cricket. Injuries & uncertainties were countered with poise & confidence. One of the greatest series wins!
Congrats India. pic.twitter.com/ZtCChUURLV

Congratulations #TeamIndia 🇮🇳 Absolute superstars all of you 👏👏 A proud and historic moment for Indian cricket! Battered, bruised, but champions as well 🏆

Remarkable. Injuries galore, absent players, & beating Australia at their fortress at the Gabba. This has been the most remarkable test series victory I’ve watched in my experience. India’s depth of talent, heart and character must forever lift an entire nation. Congratulations.

Historic series win for Team India! Youngsters delivered when it mattered, with Gilll and Pant in the forefront. Hats off to Ravi Shastri and the support staff for their part in this turnaround! So so proud of this bunch, this is one for the ages👏👏👏 #AUSvsIND

This is what a billion goosebumps feel like! Proud Indian! 🇮🇳 #INDvsAUS

The champions & the greatest chase!🙌#TeamIndia has proved it again by team efforts, great character, courage & max determination! Despite the bruises, the team made it possible for our country. That’s why we play for the country’s flag to go high every time we perfom🇮🇳#INDvAUS

Test cricket’s heart is beating strongly! That was an extraordinary win @BCCI & a fantastic series to watch. Aussies not lost at The Gabba since 1988. Wow

Congratulations Team India on winning the Test series against Aussies in Australia. Rishabh Pant was tremendous. Pujara, as usual, was gutsy with his knock. A series win to remember for long time. #AUSvIND @RishabhPant17 @cheteshwar1 pic.twitter.com/J1KMZ1pmTL

The Greatest Test series win of all time … Well done #India you have just shown the way for England to get back those Ashes back later in the year … 👍 https://t.co/eWKaKFfJ41

Here are some reactions from fans:

And thus they prove..that all one needs to win is sheer determination.

P.S. I am sure our gain must be somebody’s ‘paine’ (Pun intended😆)
#INDvsAUS 🏏
PC : ESPN Cric Info pic.twitter.com/MYg30QWBei

Congratulations to team India and every Indian for the historic win! A big round of applause for the squad that has proved its worth in all the odds!