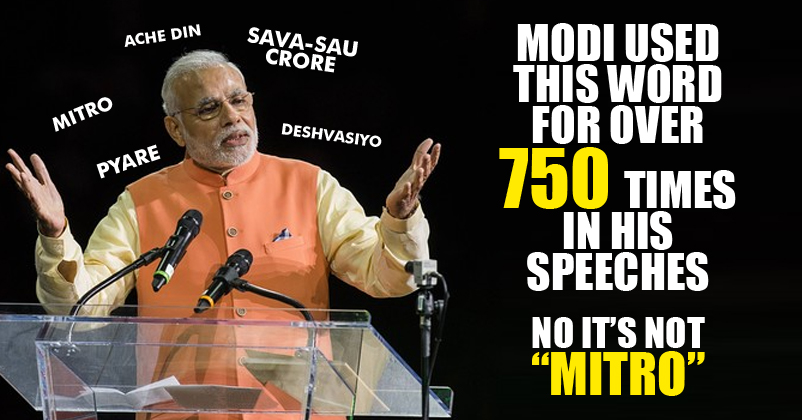 It was the NYE (New Year’s Eve) when the people gathered at Social, a chain of bars in New Delhi, Mumbai, and Bangalore, to hear their favorite PM Modi deliver the speech on the report of first 50 days since Demonetization.

More than the report on demonetization, they were interested in the offerings of the bar. The bar was offering a pint of beer for Rs 31 everytime PM Mode uses the word ‘Mitron’ (Friends in Hindi). Well, after the speech, unexpectedly the crowd was disappointed. The reason was that Prime Minister Modi did not use the ‘M’ word even once.

Mitron has become a mocking word for his critics, his haters use it sarcastically. However, the use of the word is in decline. The PMO website provides all the transcripts of Modi’s speeches.

Breaking The Myth around ‘Mitron’
Modi delivered around 440 speeches in his two and half year as the Prime Minister. More than half of the speeches were in the Hindi language. This figure doesn’t include his unofficial speeches or campaign addresses, otherwise, the trend would have been different.

The word Mitron was used 61 times in his 40 speeches compared to the words ‘bhaiyo-beheno’ (brother and sisters) which is used over 750 times in his speeches.

Other salutation words used were ‘desh vasiyo’, ‘saathiyo’ and ‘mahanubhav’, all of which were more than ‘Mitron’.

The downfall of ‘Mitron’

The fans of PM Modi who love the word Mitron in his speeches would be slightly upset. The word use is showing a decline and is used hardly in his speeches. Let’s have a look at the chart below: ‘Doston’ on the rise

While the word ‘Mitron’ is on the decline, the word ‘Doston’ is on rising. In 2016, the word was used in 8 speeches, more than Mitron which was just used in 7 speeches. You can check out the trend of other words here

Well, only if Social would have got the stats right. There’s always a next time, what do you guys have to say?

Continue Reading
You may also like...
Related Topics:deshwashiyo, doston, mitro, PM Modi Used This Word In His Speeches For 750 Times & No It's Not 'MITRO'

This Cute 8-Yr Girl Was Called FAT By Her Crush But Now, Twitter Can’t Stop Loving Her
Angelina Jolie’s Superhot Photoshoot At The Age Of 15 Will Increase Your Room’s Temperature 10 Times