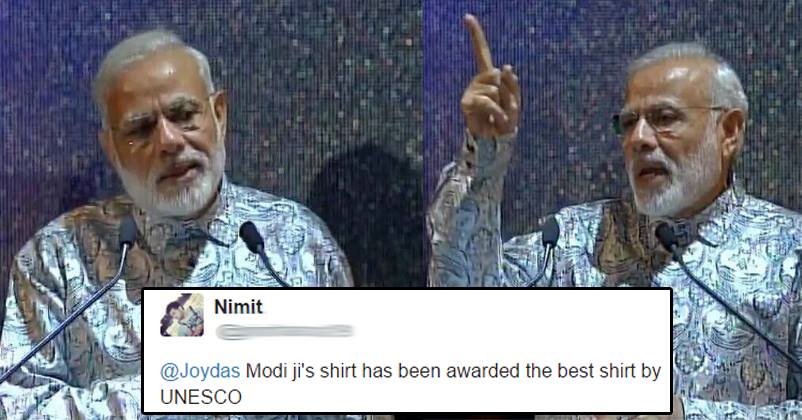 Narendra Modi, the Prime Minister of India, is on a tour of 5 days in which he will visit 4 countries, i.e., South Africa, Kenya, Mozambique and Tanzania. On the first day of his tour, he interacted with Johannesburg’s Indian community and he was applauded the most for his statement with regard to the transformation of Mahatma Gandhi in South Africa.

PM Narendra Modi spoke about the development of the nation and role of the youth in it; however, it was Modi’s shirt which grabbed the attention and interest of people the most. A ‘Madiba’ shirt was worn by PM Modi; just to inform, ‘Madiba’ shirt has a connection with Nelson Mandela, anti-apartheid icon, nevertheless Twitter went gaga over it and here are some of the best reactions:

And the award for the best shirt goes to…….

It’s the time to disco 😀

🎧 Its the time to disco…🎧 pic.twitter.com/vVqi9bRs63

Am I the only one wondering what's wrong with #Modi's shirt in Johannesburg! Waiting for him to break into a Hawaiian dance! #ModiInSA

OMG! Look what he did when asked to cut his dress bill:

@ErManish63
U asked to cut his dress bill and look what has he done now! 😉 😂

Modi's shirt reminds of those moving patterns which are an illusion.

Don’t forget to share your opinion with regard to the shirt of PM Modi in the comments section below.

20 Funny & Creative Toilet Sign Boards Around The World
This Riddle Is Not So Easy, Can You Solve It ? ?