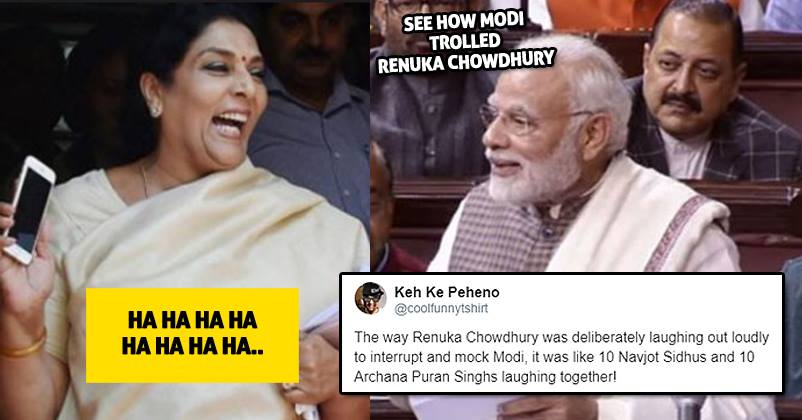 Yesterday the Indian Prime Minister Narendra Modi ripped apart Congress when he gave his speech in the Parliament and held them responsible for partition of the country for their personal interests. PM Modi went on to slam the party and said that the country is still paying for the sins committed by them as they blindly worshipped one family. The behaviour of the opposition was also not up to the standards as all the time, the opposition MPs were shouting slogans and making a noise.

One of the senior MPs of Congress Renuka Chowdhury was laughing loudly during the PM’s speech which irked the speaker Venkaiah Naidu and he rebuked her for such behaviour. But PM took a dig at Renuka Chowdhury and said,

PM Modi meant to say that Renuka’s laughter is quite similar to the laughter of Shurpanakha, the female demon of Ramayana.

However, Renuka Chowdhury didn’t like it and called it a comment against women. She talked to mediapersons outside and said,

“He (the Prime Minister) has made a personal comment which denigrates the status of women. If he would have spoken this outside Parliament, there would have been a case against him according to law.”

“How can a Prime Minister speak like this? This shows his culture. I can’t go to that extent.”

PM made a personal remark, what else do you expect from him? I can't fall to that level to reply to him. This is actually called denigrating the status of a woman: Renuka Chowdhury,Congress pic.twitter.com/5DIEYAOfdf

Twitter just got crazy after this incident; majority of the users actually agreed with PM Modi and trolled Congress MP Renuka Chowdhury. Check out some selected tweets:

This is what PM meant when he requested RS speaker to let Renuka Chaudhary laugh as after Ramayan Serial he got the chance to hear that laughter today only. 😂#ModiHitsBack pic.twitter.com/zSWLuvnaLU

After Modi's jibe at Renuka Chowdhury, time to make a list of Politicians who can play Ramayana Characters.

The way Renuka Chowdhury was deliberately laughing out loudly to interrupt and mock Modi, it was like 10 Navjot Sidhus and 10 Archana Puran Singhs laughing together!

If renuka chowdhury exist during Ramayana… by the way who did this😜😂😂 pic.twitter.com/indVCdf5lR

This is not the first time #RenukaChowdhury showed her talent it's been from Ramayan Kal.😎

Renuka Chowdhury is playing 'women victim card' after
Modiji's comment on her laugh today. She was women & child welfare minister under UPA. Look at the things she did for women to play a victim card today.
Also note,
that girl in second picture is a minor. #ModiHitsBack pic.twitter.com/H5uS4KFXZm

Lol.Renuka Chowdhary calls herself a Woman

She forgets how to behave in front of PM & respect our PM, Now when she gets an awesome reply ,she is playing feminism card#NamoParliamentRoar #RenukaChowdhury

When I make fun of someone Vs when they make fun of me #ModiHitsBack #RenukaChowdhury pic.twitter.com/FJigXhoFCP