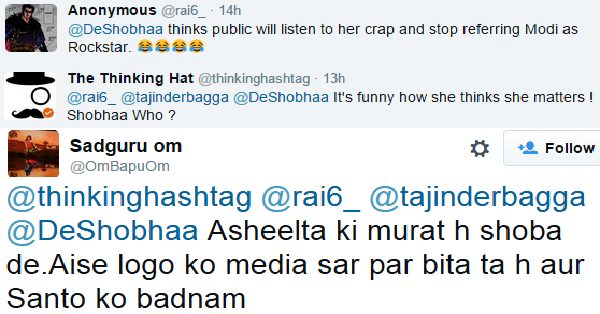 Shobha De, the columnist quite recognized to make controversial comments on Twitter, seems to have dug her own grave by tweeting something which is not acceptable on the part of PM Modi’s fans with regard to his visit to United Arab Emirates.

Excited Indian Diaspora applauded and acclaimed PM with the term ‘Rockstar’, maintaining that Modi has brought the nation on a new height and level in the course of his speech at Dubai Cricket Stadium.

It was on Monday night that Shobha De took to Twitter and tweeted, “Can we please stop referring to India’s Prime Minister as a ‘Rockstar’!!!! Hello! Dubai. He isn’t from Bollywood!”

Can we please stop referring to India's Prime Minister as a 'Rockstar'!!!! Hello!Dubai. He isn't from Bollywood!

Narendra Modi addressed Indian Diaspora in such a way that mesmerized and enthralled everyone and people started chanting ‘Modi Modi’ with which the entire place began to echo!!

PM addressed Indian Diaspora in this way, “I can see a ‘mini India’ in front of me. I salute all Indians, who have come from every corner of UAE. You are among those who are earning livelihood here for 15-20 years and continue to make India proud through your conduct.”

@DeShobhaa Hav ur Bollywood 'Rockstars' keep coming here.None of'em could ever pull a crowd like this single handedly pic.twitter.com/dB7nhwuzFy

@DeShobhaa Meaning of Rockstar: Person from any field who's highly admired
That's why he IS a Rockstar 😆 pic.twitter.com/8l65LtQB4j

What is your opinion with regard to this? Share your views in the comments section below.

9 Memes on Modi’s Famous Pic That Will Make You ROFL
15 Hard Hitting Quotes From Modi’s Speech In Dubai!!