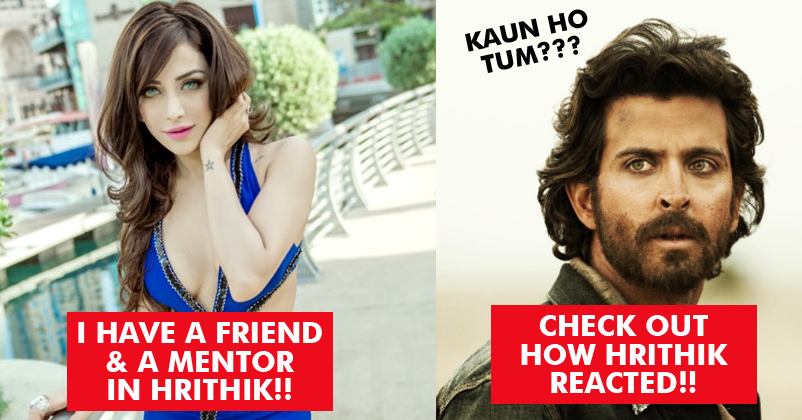 Angela recently gave an interview to DNA and in that, she confessed that she has a huge crush on Hrithik. She also revealed that Hrithik has been her friend and mentor; Angela developed a liking for Hrithik when they met for their 2nd commercial.

“I was under the impression that he had forgotten me. After all, he is a star who shoots umpteen ads with several young models. But he called out to me and remembered all the conversations we’d had and the fact that my dad was from Valencia. He also asked me jokingly whether the colour of my eyes was real. When I signed a movie in the South. He also inquired about the maker and assured me that this film would definitely take me places.”

Reports also quoted her as saying,

“I am happy that I have found a great friend and mentor in him. I would love to work with him again but I don’t know when it will happen.”

She adds that Hrithik asked her to work on her Hindi diction and of course, her acting skills. As per Angela, Hrithik is her very good friend but you’ll be surprised to know what the actor has to say on this. He clean bowled her with just 1 tweet…

Hrithik posted this article screenshot on Twitter and questioned Angelina, “My dear lady, who are you and why are u lying?”

My dear lady, who are you and why are u lying. pic.twitter.com/xydPrKr8nH

Hrithik has a completely different angle to the story. Does this give us a hint that Angela is lying? Many actresses use such tactics to gain publicity, so is Angela one of them? Well, at least this tweet of Hrithik suggests so. Seeing his tweet, here’s how fans reacted;

She is just being Eklavya to Dronacharya!

She is just being Eklavya to Dronacharya !!
What you want ? Face/figure ?

Lol I think she is trying to hook you up buddy. Just be careful

She is a cute fake fan of your's 😆

He won't make the same mistake again by ignoring these freeloaders. Their lies will not stop if he doesn't speak up.

What do you think about this? Share your views in our comments section below.

Kapil Tweets After 14 Long Days! He Tweeted This & Also Told Why He Couldn’t Come Online
KRK Shared The Pic Of His Daughter Farah & She’s Damn Pretty! Twitter Has Gone Crazy Seeing Her!