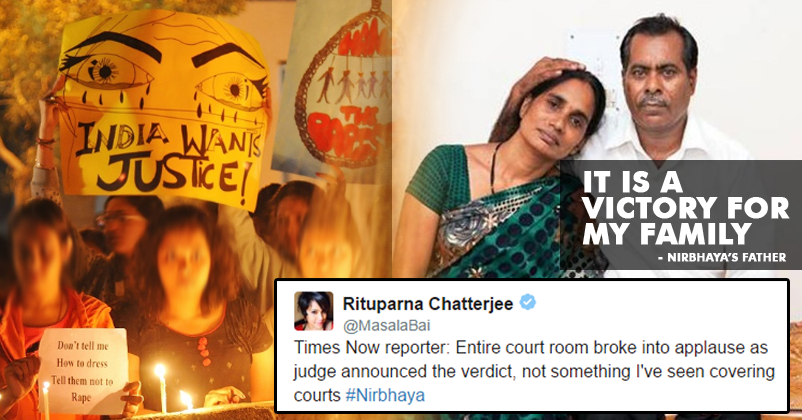 Today, the Supreme Court made everyone proud by announcing a death sentence for Nirbhaya rapists. Everybody welcomed this decision and felt glad that the judicial system can be trusted in case of such serious incidents.

Nirbhaya’s gang rape had created a huge uproar across the nation and people wanted the court to give the strictest possible punishment to the rapists.

Today, a bench of Justice R Banumathi, Justice Ashok Bhushan and Justice Dipak Mira stated that the convicts deserve to be hanged because of the brutal treatment they had given to the girl. The Supreme Court also felt that since this is a very rare case, extreme punishment is necessary.

Even Nirbhaya’s parents are very happy with this decision; they say that it’s a victory for their family. Meanwhile Twitter users are in a celebration mode as the apex court has passed orders to hang those 4 convicts.

Check out what they said;

Death sentence for four in #Nirbhaya case- definitely meets rarest of rare benchmark- if ever a case called for hanging, this was it.

Finally a JUST closure in #Nirbhaya's case.While the memory of the brutal gangrape is still fresh in our minds.
It has a stronger deterrence

I welcome #SupremeCourt verdict to uphold death sentence to 4 convicts in #Nirbhaya case.This will serve as warning to similar offenders.

Nothing has changed, since that horrific and murderous night, though. Are women ANY safer? If not, shame on us all.

By awarding death penalty to convicts in #Nirbhayaverdict, honourable Supreme Court has reaffirmed people's faith in the judicial system.

Supreme Court covered itself with glory today giving maximum possible punishment under law: death sentence. My faith in the SC is vindicated

In an interview with ANI, Nirbhaya’s father told them;

It's a victory for my family,I am very happy with the judgement: #Nirbhaya's father to ANI

We are happy that Nirbhaya has finally got justice; what do you have to say about this? Share your views in our comments section below.

This Girl Shares How Poor Kids Were Not Allowed To Enter Metro Despite Having Money
Someone Trolled This Girl For Being Fat! Her Boyfriend’s Reply Has Won Our Hearts!