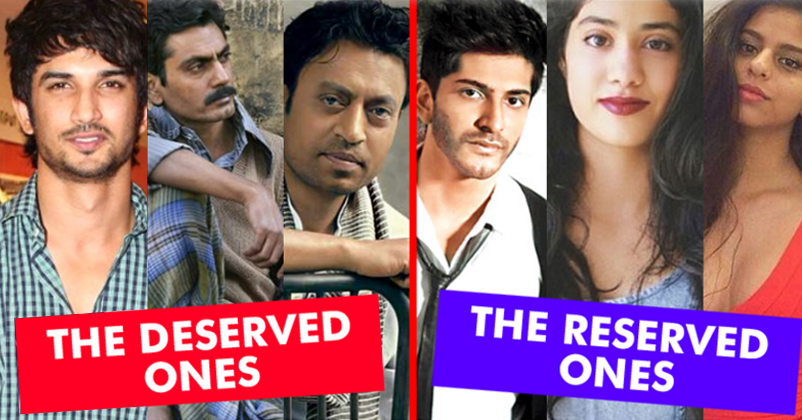 If we have to sum up the world of BOLLYWOOD in three simple words, it has to be LIGHTS, CAMERA & ACTION. However, in today’s time, the words which describes BOLLYWOOD in a much transparent manner is BLOODLINE & POLITICS.

‘APPROACH & LINEAGE’ are something that runs and sells much faster than the word ‘TALENT’. The launch of new age star kids with major production houses has a completely different story than to what they show in their PR based interviews, promotions and what not.
In the Golden age of Cinema, we have had superstars who had come from small towns and modest backgrounds. These breakthrough superstars include Amitabh Bachan, who toiled hard in the film industry before tasting success with Zanjeer. Dilip Kumar and Rajesh Khanna came through the same selection process and ruled the silver screen with their acting prowess and charming presence.

In addition to this, during the 80’s and 90’, Govinda had burst on to the stage after coming from a small place in Viirar. A little known Shah Rukh Khan quietly entered our homes, and hearts, from a TV show called ‘Fauji’. He then went on to become the King Khan of Bollywood. But, then in recent times, we have had a scarcity of talented actors on screen, as they have been replaced by star sons and star daughters. This has led to big budget flops in the past decade and the quality of our cinema drop drastically.

With star kids bursting on to the screen, the unknown talented actors (or Outsiders) have received limited scope to prove themselves. We as audiences have also become curious to see how our favourite superstar’s children would look and act on screen, irrespective whether they have any talent or not, since we have becomes slaves of their bloodline.

Here are some of the actors and actresses, who are expected to flaunt their TALENTS on the silver screen very soon, just because they have that APPROACH & LINEAGE in the industry, while others don’t.

Sridevi’s Daughter, Jahnavj Kapoor – If the rumors are to be believed, she is the face of Karan Johar and Sajid Nadiadwala’s next venture ‘SHIDDAT’ (which might be Marathi blockbuster ‘SAIRAT’s remake) opposite Varun Dhawan. While SAIRAT had an all new cast with unknown but talented actors, Jahnavi would be served a kickstart on a platter with an A-list co star and a major production company to back her. Saif Ali Khan & Amrita Singh’s daughter, Sara Ali Khan – A lot of rumors have been floating around Saif Ali Khan’s beautiful daughter Sara Ali Khan’s debut. But if the grapevine has to be believed, she will be making her foray in Bollywood with a film opposite Ranveer Singh or Karan Johar’s sequel to Student of the Year, which might also star Shahid Kapoor’s brother, Ishaan. Sara has justified her parent’s good looks but can she be as talented as them in the acting department. Amitabh Bachan’s Grand Daughter Navya Naveli – Her Instagram pictures have already sent internet users in a tizzy. Now, everyone is anxiously waiting for Navya’s expected turn to burn the silver screen with her sultry presence. Controversies have already marred the little starlet because of her close friendship with SRK’s son Aryan. Will Navya prove that she is more than just a part of the biggest bloodline in the Hindi Film industry. Currently, as said by her mother Shweta, Navya doesn’t have any plans to enter Bollywood, but the dreams of stardom can change a lot of plans. King Khan’s Daughter Suhana Khan – She is just a teen at the moment and would decide whether she wants to storm Bollywood after her studies. However, with the kind of popularity she has received at such a tender age it won’t be a surprise that Suhana would be launched in a big budget film soon. Let’s just hope that she is the talented princess much like her King father. In addition to these girls, many star sons are scheduled to be launched with prepared platforms. This includes Shah Rukh Khan’s son Aryan Khan, Suneil Shetty’s son Ahaan Shetty & Saif Ali Khan’s son Ibrahim Ali Khan. So be ready for your kids to idolize the same actor’s children whom you have been following since your childhood. Their surnames would help these star kids to get an audience which a struggling newbie has to build for years around him with a lot of hard work.

There is no doubt that there have been exceptions where a new actor or actress from Influential Bollywood Families have done well in Bollywood by proving their acting mettle, Alia Bhatt & Varun Dhawan are perfect examples of it. But the question here is how many years does an actor like Nawazuddin Siddiqui has to struggle just to reach the same stage and audience. Many ‘OUTSIDER’ actors have opened their own production houses just because they weren’t given opportunities for the work they wanted to do, this includes Akshay Kumar or John Abraham, who virtually entered the industry as an outsider, but are now working on their own terms just because they want to deviate from the family bloodlines.

It’s not just the family who help their children in getting an audience but it’s the industry in itself which pushes a starlet to stardom with their help and support, while others have to depend on their talent and luck for their turn of fame.
Here are some examples where Bollywood has been unfair in this screening process. There are many deserving candidates for major movies, who can deliver much better performance than the ones who are already in the process of being selected just because of their family name that they carry along with them.

There is no doubt that they may end up well, but the selection process needs to be unbiased and should not be conducted just for the sake of a surname ! ! Only then will our Cinema rise to internally standards in terms of content, otherwise the biggest film industry in the world still has to face the embarrassment of being Oscarless on the World Cinema stage.

Meet Suhani Bhatnagar, Young Babita Phogat In Dangal! She Looks Like An Angel In Her Pics…
Truth Behind Kapil Sharma Not Promoting Sunil Grover’s Movie On His Show!