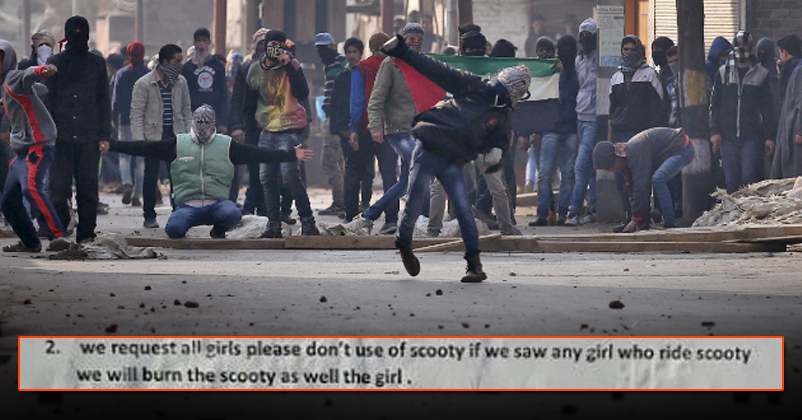 Kashmir is a never ending issue. Recently or more precisely since 1947 it has been in news for all wrong reasons. Yes, I agree with some of my mature Kashmiri friends that nothing is black and white and we do need to look down and introspect ourselves. But hitting back at the army, the same army which saved your little ‘arse’ while you struggled through floods, landslides etc isn’t a good option.

You have a problem ? Come forward and tell the nation in a peaceful manner rather than pelting stones at one who protects you.

In one of our memes, which was more like a fact draft, we gave your the idea about how these young kids were drawn to throw stones at Indian Army. Have a look You might wonder who sponsors such huge amount of money. Its ‘Sangbaaz Association Jammu and Kashmir, Azad Kashmir’ – the organization responsible for igniting people to throw stones at Indian Army. These low lives fell to another low level by issuing another announcement which is a serious threat to the freedom of the girls living in the valley.

The group issued a chilling threat to all the women by announcing that if any woman is seen driving scooty, she along with her scooty will be burned alive without any room of mercy.

Now it is quite ironic because the people who have been asking for so called freedom from India are instead snatching the freedom from their own mothers, sisters and daughters.

In the poster, they have also named some shopkeepers and banks and asked them to shut down immediately or face consequences.

Have a look at the poster. But, if we look from the another side of the picture ( Don’t take that literally ), we need to ensure that the this poster was actually released by the concerned organization as stated in the poster. There is no mark of the authenticity except the fact of its name and logo which is quite easy to replicate in a poster which has been out in a XEROX version.

I am not defending such kind of heinous act by bringing out some other possibility which doesn’t seems to be digested by us, but from a journo point of view, my conscious does asks me to question the authenticity of the poster. It can be anyone’s work to just print an organizations name under his or her own personal agenda to disrupt the peace in the city.

I AM SAYING THIS AGAIN, I AM NOT DEFENDING ANYONE.

However, another Twitter account ‘Awaz Kashmir’ took this matter on their hands and asked the journalist about the authenticity of the poster.

Now this is certainly going nowhere other than another Twitter war as well disruption in the valley.

The Jammu and Kashmir police have gone hard to track down the real culprits behind the poster. Inspector General of Police, Kashmir zone, SJM Gillani in an interview revealed that they are examining the posters and are ready to take whatever legal action needed at that particular hour.

“There was one poster. We are examining it. Whatever legal action is necessary will be taken. There is no need to panic. We will ensure security. We will take care of people moving on Scooties,” said Gillani.

Well, we people still have no idea about main the culprit behind this poster. If you have any relevant information, please share it with us in the comment section below.